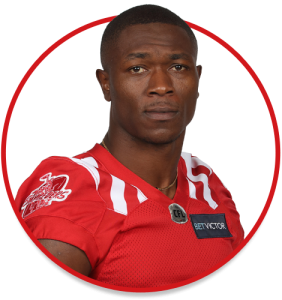 (Ottawa) After starting the season on the practice roster, Muhammad was activated for a Week 4 game against the BC Lions. He made four defensive tackles in his CFL debut. Muhammad played a total of five games and made 14 tackles including two tackles for loss and added one knockdown. He spent the final six weeks of the season on the injury list.

Muhammad played two seasons (2013, 2017) at Florida International. As a walk-on in 2013, he appeared in seven games and recorded 11 total tackles and two pass breakups. Muhammad was dismissed from the team but remained at Florida International and in 2017 he rejoined the Panthers and was placed on scholarship. Muhammad was named all-Conference USA second team after playing 13 games and recording 53 tackles including one tackle for loss while adding four interceptions including a pick-six. He also had five pass breakups. Muhammad was named the conference’s defensive player of the week after making 10 tackles and intercepting two passes in a win over Marshall. He returned one of the picks 12 yards for a touchdown.

Muhammad is alumnus of Admiral Farragut Academy in St. Petersburg, Fla., and played football, baseball and basketball for the BlueJackets in addition to competing in track.