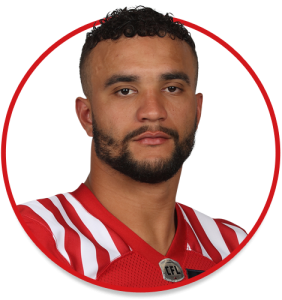 (Calgary) Dozier played all 14 regular-season games including 12 starts at the SAM position and one start at safety. He recorded 49 defensive tackles including one tackle for loss, a team-leading 17 special-teams stops, one interception, one sack and two knockdowns. Dozier’s first sack and first interception as a Stampeder both came in Week 12 against Saskatchewan. He also started the Western Semi-Final at SAM and recorded five tackles.

(BC) Dozier played ad started 16 regular-season games at safety for the Lions. He had a team-high 70 defensive tackles including one tackle for loss and added seven special-teams tackles, one interception, one forced fumble and one knockdown.

(Montreal) Dozier played all 18 regular-season games and made 11 starts for the Alouettes. He made 66 defensive tackles including one tackle for loss, 15 special-teams tackles, two forced fumbles, one fumble recovery returned for a touchdown, four knockdowns and two sacks. Dozier’s 15 special-teams tackles tied for the team-lead.

Dozier played 22 games over two seasons (2014-15) at UNC-Charlotte where he posted 135 tackles including 2.5 tackles for loss, two fumble recoveries, two interceptions and 15 passes defended. He became the first 49er to score on an interception return and a fumble return in the same season as a junior in 2014. He began his college career at Butler Community College in El Dorado, Kans., where he made 90 tackles including four tackles for loss, one forced fumble, one interception and 0.5 sacks over two seasons (2012-13). He helped lead the Grizzlies to a 20-3 record and back-to-back conference championships during his time at Butler.