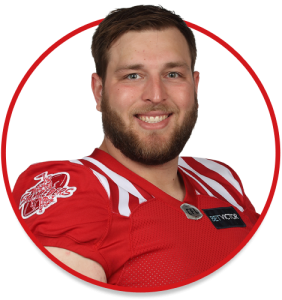 (Calgary) Bell played 13 regular-season games during his rookie season including three starts at right tackle and one start at left tackle. He was part of an offensive line that allowed the second-fewest sacks in the league and blocked for Ka’Deem Carey, who led all running backs with seven rushing touchdowns and was second in the league in both rushing yards and yards from scrimmage. Bell also dressed for the Western Semi-Final.

Bell played 26 games over four seasons (2016-19) at Wilfrid Laurier including 16 starts at right tackle. Over the 2018 and 2019 seasons, Bell was part of a Golden Hawks offensive line that allowed the fewest sacks in Ontario University Athletics and in 2019 helped pave the way for conference rushing champion Levondre Gordon. Bell was the first Golden Hawks offensive lineman to appear on the CFL Scouting Bureau’s list of the top 20 CFL draft-eligible prospects.