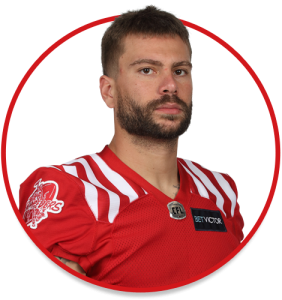 Judge was selected in the first round (second overall) by the Saskatchewan Roughriders in the 2017 CFL draft. He signed with the Toronto Argonauts on Feb. 17, 2021.

(Toronto) Judge dressed for nine regular-season games for the Argonauts and recorded 13 defensive tackles, one special-teams stop and one knockdown. He was also in uniform for the Eastern Final.

(Saskatchewan) Judge was the West Division finalist for the CFL’s Most Outstanding Canadian award after recording 61 defensive tackles including five tackles for loss, 12 special-teams tackles, five sacks, two interceptions, one forced fumble and five knockdowns in 17 games for the Roughriders. He returned one of his interceptions for a touchdown in Week 21 against Edmonton. Judge started the Western Final and recorded five tackles.

(Saskatchewan) Judge played all 18 regular-season games for the Roughriders and amassed 41 tackles including one tackle for loss, three special-teams stops, two sacks, one forced fumble and one knockdown. His first career sack came in a Week 11 game against the BC Lions. Judge also played in the Western Semi-Final and registered four defensive tackles.

Honoured: West Division finalist for the CFL’s Most Outstanding Canadian award in 2019

Judge played 47 games over four seasons (2013-16) at UCLA. Over the course of his career with the Bruins, he recorded 46 tackles including 2.5 tackles for loss, one interception, one forced fumble and two passes defended. As a senior, he made two starts at linebacker and picked up his first interception in a game at Colorado.

Judge was born in Montreal and also lived in Vancouver and Victoria before his family moved to California. He attended high school at Oaks Christian School in Westlake Village, Calif., and played linebacker and running back for the Lions. His father Douglas Christopher Judge played football at Oregon before becoming an actor including a feature role in the TV series Stargate SG-1.