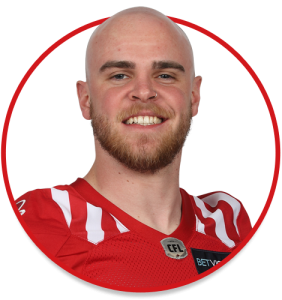 (Calgary) Moore played all 14 regular-season games in his rookie season and had nine special-teams tackles. In his CFL debut in Week 1, he blocked a punt and recovered the loose ball. Moore also played in the Western Semi-Final.

Moore played 17 games over three seasons (2017-19) with at the University of Calgary and was part of the Dinos’ Vanier Cup championship team in 2019. In his career, he tallied 77 tackles including 11.5 tackles for loss, three forced fumbles, one fumble recovery, one sack, one interception, one pass defended and one blocked kick.

Moore is an alumnus of South Delta Secondary School and won a B.C. provincial championship with the Sun Devils in 2014. He majored in geography at the U of C.