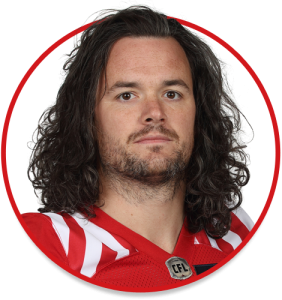 Power originally signed with the Stampeders on May 21, 2013, and spent six weeks on the practice roster before returning to university.

(Calgary) Power tore his Achilles during training camp and missed the entire season.

(Calgary) Power was under contract with the Stampeders but the season was cancelled because of the global pandemic.

(Calgary) Power played all 18 regular-season games for the Stampeders and made 10 starts at fullback. He was also one of Calgary’s leading special-teams players and was second on the club with 14 tackles. Power also had had one forced fumble and four receptions for 27 yards. He was the starting fullback for the Western Semi-Final and recorded one special-teams tackle.

(Calgary) Power played two games, making his CFL debut in the Labour Day Classic and getting into the lineup again on Oct. 24. He began the season on the one-game injury list before being placed on the practice roster.

(Calgary) Power spent six weeks on the practice roster before returning to university.

After starting the 2013 season on the Stampeders’ practice roster, Power returned to Saskatchewan for his senior season and played eight games as a receiver, making 14 catches for 143 yards and one touchdown. On special teams, he recorded 10 total tackles including eight solo stops. Power also returned three kickoffs for 35 yards. In Saskatchewan’s playoff game against Manitoba, Power had four catches for 62 yards. He played eight games for the Huskies in 2012, making 18 catches for 231 yards and two touchdowns. Prior to 2012, Power played linebacker for the Huskies. In 2011, he recorded 16 tackles and one fumble recovery in eight games.

Prior to playing for the University of Saskatchewan, Power played both offence and defence while attending Holy Trinity Academy in his hometown of Okotoks. During his time at the Academy, he was a three-time winner of defensive-player-of-the-year honours. Power is the Stampeders’ player representative for Canadian Blood Services.