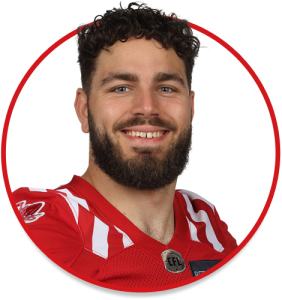 (Calgary) Hunchak played all 14 regular-season games and made 16 catches for 247 yards. He also completed one pass for 36 yards and recorded one tackle. Hunchak started the Western Semi-Final and had two catches for 11 yards.

(Calgary) Hunchak was under contract with the Stampeders but the season was cancelled because of the global pandemic.

(Calgary) Hunchak returned to university after attending training camp but was recalled to Calgary after injuries depleted the receiving corps and made his CFL debut in Week 4 at Saskatchewan. He recorded his first catch as a pro – a 57-yarder – the following week in Hamilton and ended up making 16 receptions for 231 yards over the course of his rookie campaign. Hunchak had a pair of five-catch performances in Week 13 at Edmonton and Week 15 at Toronto. He also was in uniform for the Western Semi-Final.

Hunchak was a two-time second-team Ontario University Athletics all-star at York. In 2018, he finished fourth in the OUA with 58 receptions. He had 610 receiving yards and six touchdown catches. He was limited to three games in 2017 due to injury, but in 2016 he earned second-team all-conference honours after making 43 catches for 588 yards and five touchdowns.

Hunchak was teammates with Stamps defensive back Nick Statz at Calgary’s Notre Dame High School. Hunchak was a three-time provincial all-star with the Pride. He won a silver medal with Team Canada at the U-19 world championships in Kuwait in 2014 and represented his country at three consecutive U-19 International Bowls in Dallas.