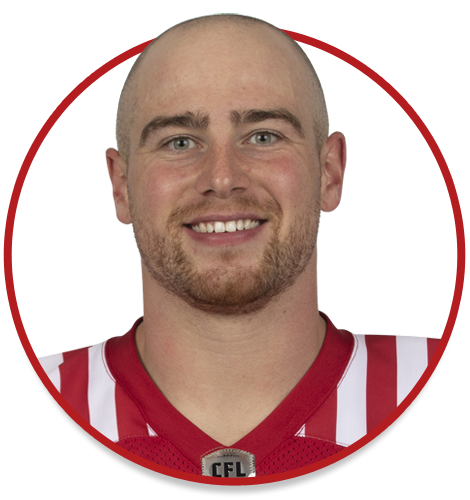 McGough was selected in the first round (fourth overall) by the Hamilton Tiger-Cats in the 2017 draft. He originally signed with the Stampeders on Feb. 11, 2020, and was placed on the retired list on July 29, 2021.

(Calgary) McGough was with the Stampeders at training camp and was placed on the retired list prior to the start of the season.

(Calgary) McGough was under contract with the Stampeders but the season was cancelled because of the global pandemic.

(Hamilton) McGough played all 18 regular-season games for the Ticats and made one start. He recorded four defensive tackles, including one tackle for loss, 11 special-teams stops and picked up his first career sack in a Week 19 game against Ottawa. He also had one forced fumble and one knockdown. McGough was also in uniform for the Eastern Final and the Grey Cup and registered one special-teams tackle in the championship game.

(Hamilton) In his rookie season, McGough played all 18 regular-season games including his CFL debut in Week 1 against the Toronto Argonauts. He finished the season with three defensive tackles and 18 special-teams tackles.

McGough played four years (2013-16) at the University of Calgary. He earned Canada West all-star honours in 2014 and 2016 and was a second-team all-Canadian in 2014. In 26 career games for the Dinos, McGough amassed 67 tackles including 17 tackles for loss and nine sacks. He started his university career at running back before making the switch to the defensive line. He was part of two Hardy Cup-championship teams with Calgary.

McGough played both running back and defensive end at Crescent Heights High School in Medicine Hat.