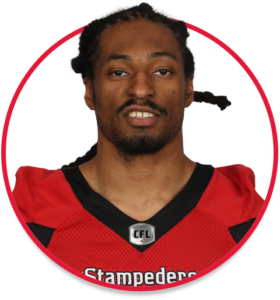 Pro path
Stephen was selected in the second round (eighth overall) by the Hamilton Tiger-Cats in the 2012 CFL draft.

2017
(Hamilton) In 18 games played, Stephen had 17 starts. He tied his career-high with 48 defensive tackles and also had six special-teams tackles, three interceptions, one forced fumble and four knockdowns. Stephen’s 17 starts and 54 total tackles were both career highs.

2016
(Hamilton) Stephen made 12 starts in 12 appearances for the Ticats. He totaled 38 defensive tackles and eight special-teams tackles to go along with two tackles for loss, two interceptions, two forced fumbles, two sacks and three knockdowns. He also played in Hamilton’s Eastern Semi-Final and made one tackle.

2014
(Hamilton) Stephen started 16 times in 18 games played. He tallied 46 defensive tackles, two special-teams tackles and a career-high six tackles for loss. Stephen had two interceptions and two knockdowns. In the playoffs, he had four tackles and one interception in the Eastern Final. He was also in action for the Grey Cup in a loss to the Stampeders.

2013
(Hamilton) As a CFL rookie, Stephen played 14 games and made 13 starts. Stephen registered 35 defensive tackles and four special-teams tackles. He forced one fumble, recovered one fumble and had three knockdowns. He registered one forced fumble in the Eastern Semi-Final as well as two defensive tackles and one special-teams tackle in the Eastern Final. He did not dress for the Grey Cup.

College
Stephen played two seasons (2011-12) at Northern Illinois after starting his collegiate career at Wilfrid Laurier University. In 16 games at Northern Illionois, he had 17 total tackles and one interception. He also returned a blocked punt for a touchdown. In two seasons at Wilfrid Laurier, Stephen accumulated 80 tackles, two sacks, six interceptions and two forced fumbles. He was named second-team Ontario University Athletics in 2008 and first-team OUA in 2009.

Personal
Stephen was a city all-star in his senior season at Turner Fenton Secondary School in Brampton, Ont. He saw action at safety and quarterback while also returning punts. He was also a standout basketball player at Turner Fenton. His older brother Patrick also played football at Northern Illinois. Courtney is a previous teammate of three current Stamps players – Junior Turner in community football, Rob Maver in high school and Juwan Brescacin in university.