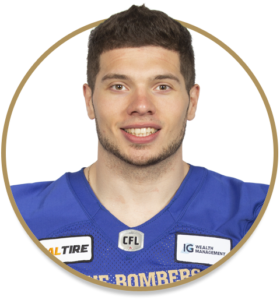 (Montreal) Lalama was under contract with the Alouettes but sat out the season.

(Montreal) Lalama was under contract with the Alouettes but the season was cancelled because of the global pandemic.

Lalama won the Presidents’ Trophy as the outstanding defensive player in Canadian university football in 2016 as a member of the University of Manitoba Bisons. In eight games, he recorded 89 total tackles including 2.5 tackles for loss, one sack, three forced fumbles and seven pass breakups. In 29 career games for the Bisons, Lalama made 184 tackles including 11 tackles for loss, two sacks, three forced fumbles, three fumble recoveries and one interception.

Lalama is an alumnus of St. Paul’s High School in Winnipeg. He has a degree in kinesiology and is working towards his master’s degree in business administration.