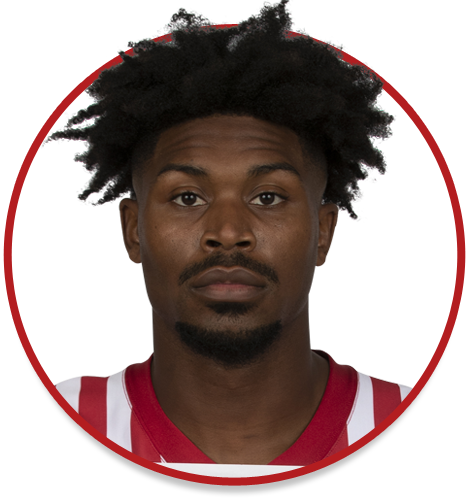 Amos originally signed with the Stampeders on Oct. 3, 2019. He was released on Jan. 15, 2020, to allow him to pursue a National Football League opportunity. He attended training camp with the Green Bay Packers and was released on Sept. 5, 2020. Prior to his first stint with Calgary, Amos signed as an undrafted free agent with the NFL’s New York Giants on May 3, 2017. He attended training camp and was waived on Sept. 2, 2017.

(Calgary) Amos started all 17 games in which he appeared, recording 42 tackles including one tackle for loss, eight knockdowns, five interceptions including one returned 79 yards for a touchdown and one special-teams tackle. The pick-six came in a Week 13 win at Edmonton. Amos’ five interceptions tied him for the third-best total in the CFL and he was named a West Division all-star. Amos also had one tackle in the Western Semi-Final.

(Calgary) Amos played two games for the Stamps after signing on Oct. 3 as he started at halfback against BC in Week 18 and at cornerback in Week 20 against Winnipeg. Amos had a total of 10 tackles and one knockdown.

Amos played four seasons (2013-16) at East Carolina. In 49 career games for the Pirates, he had 116 total tackles including 5.5 tackles for loss, two sacks, one interception, two fumble recoveries and 11 pass breakups. His interception came against Tulsa during his freshman season and was returned 100 yards for a touchdown.

Amos was a versatile player for Manchester High School in Midlothian, Va., seeing action as a receiver, defensive back and kick returner. He scored 12 touchdowns during his senior season – five on offence, five on special teams and two on defence. Amos also played baseball and basketball at Manchester.