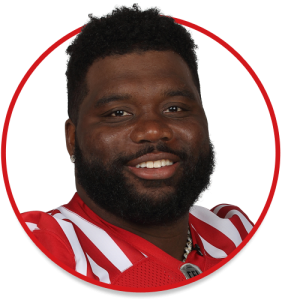 (Edmonton) Dennis was under contract with the Elks but opted not to report to training camp and sat out the season.

(Calgary) Dennis earned West Division all-star honours as he played and started 16 games, seeing action at both left tackle and right tackle. He was part of an offensive line that allowed the second-fewest sacks in the CFL and helped the Stamps offence rank in the top third of the league in a number of categories. Dennis also started the Western Semi-Final.

(Calgary) Dennis started at left tackle for all 18 regular-season games as well as the Western Final and Grey Cup. He was part of an offensive line that was tied for the CFL lead in fewest sacks allowed with 27. Dennis was a West Division all-star and the team’s nominee for Most Outstanding Offensive Lineman.

(Calgary) Dennis earned West Division and CFL all-star honours and was named the league’s Most Outstanding Offensive Lineman after playing all 18 regular-season games including 15 starts at left tackle, two at left guard and one at right guard. He was an integral part of a Stamps unit that allowed the fewest sacks in the CFL with 20 and also helped tailback Jerome Messam run for a league-leading 1,198 yards. Dennis also started the Western Final and the Grey Cup.

Honoured: Stamps’ nominee for Most Outstanding Offensive Lineman in 2016 and 2018

Dennis played 52 games — including 37 starts — over five seasons (2007-11) at Temple. As a senior in 2011, he started 11 games at left guard and was invited to play in the East-West Shrine Game. In 2010, he made seven starts for the Owls including four at left tackle, two at right guard and one at left guard. Dennis played three games in 2010 before injuring his knee and being granted a medical redshirt. He made 10 starts as a freshman in 2007 and six starts in 2008.

Dennis has a degree in broadcast journalism from Temple. He didn’t start playing football until he was a junior at Trinity-Pawling School in Pawling, N.Y.