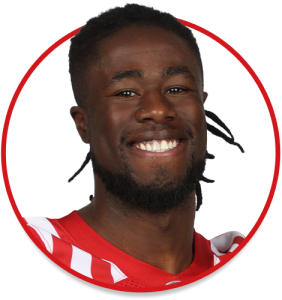 (Saskatchewan) Bouka played six regular-season games for the Roughriders and registered two defensive tackles, two special-teams tackles, two interceptions, two knockdowns and a forced fumble. Both interceptions came in a Nov. 20 game at Hamilton. He also played in the Eastern Semi-Final and Eastern Final and two defensive tackles and a forced fumble.

(Saskatchewan) Bouka played all 18 regular-season games for the Roughriders and made one start. He accumulated five defensive tackles, three special-teams tackles and one interception. He was in the lineup for the Western Final but did not record any stats.

Bouka played three seasons (2012-14) for the University of Calgary Dinos and was sidelined due to injury to the 2015 season. He began his time with the Dinos at receiver, making 16 receptions for 137 yards and two touchdowns, before converting to defensive back in 2013. Bouka went on to make 24.5 tackles and one interception.

Bouka attended CEGEP at Montmorency College in Laval, Que. He currently owns Bouka Performance and Wellness, a strength and conditioning and speed development company designed for young athletes in Calgary.