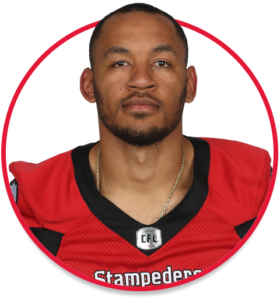 2018
(Calgary) Rogers, whose first stint in Calgary ended when he left to pursue an NFL opportunity, rejoined the Stampeders in training camp. He played nine regular-season games and made eight starts, recording 36 catches for 499 yards and five touchdowns. Rogers had a pair of 100-yard games – in Toronto in Week 2 and at home against Montreal in Week 6 – and he was second on the club with 21 receptions to convert second downs. He was a standout in the Western Final as he had six catches for 61 yards and a franchise-playoff-record three touchdowns to help the Stamps defeat Winnipeg. Rogers added six receptions – including three second-down conversions – for 64 yards in Calgary’s Grey Cup victory over Ottawa.

2015
(Calgary) Rogers started 17 games and finished as the CFL’s leading receiver with 87 catches for 1,448 yards and 10 touchdowns. He had a six-game touchdown streak from July 13 – Aug. 22. He was the team’s leading receiver in Games 3, 4, 5, 6, 8, 9 12 and 16 and has had five 100-yard games. On Sept. 18 he was the first CFL receiver that season to reach 1,000 yards and became the first Stamp to crack the 1,000-yard milestone after 12 games since Ken-Yon Rambo in 2008. He had a career-high 152 receiving yards on Aug. 29 against Winnipeg. He finished the season with 13 catches of 30 yards or more and was among the leaders in receptions (87), yards after catch (399) and second-down conversions (28). He made at least four catches in 15 of the 17 games he played and had at least 60 yards on 15 occasions. Rogers started the Western Semi-Final where he had four catches for 71 yards and two touchdowns and also started in the Western Final where he had three catches for 117 yards and a touchdown. He was named a West Division and CFL all-star.

College
Rogers set several school records at California Lutheran as he caught 220 passes during his career with the Kingsmen for 3,461 yards and 41 touchdowns. During his senior season in 2012, he made 91 catches for 1,298 yards and 18 touchdowns. He was a three-time Southern California Intercollegiate Athletic Conference all-star selection and was named the conference’s offensive player of the year in 2012.