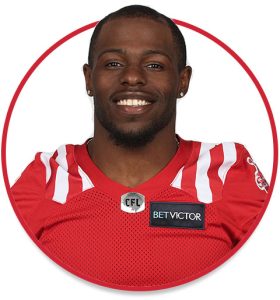 (Calgary) Allen played one pre-season game for the Stampeders and had one reception for 10 yards and one missed-field goal return for 45 yards.

Allen played nine games over two seasons (2017-18) at Ole Miss, seeing action on special teams and as a backup receiver for the Rebels. He had four catches for 44 yards and one kickoff return for 10 yards. Allen played his sophomore season at El Camino College in Torrance, Calif., and played on both sides of the ball. In two games, he had three catches for 40 yards as well as three tackles and a pass breakup. Allen started his collegiate career at Bethany (West Virginia) College and dressed for six games, making six catches for 125 yards and rushing for 33 yards and one touchdown.