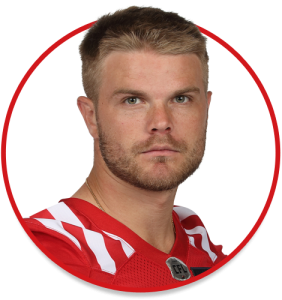 (Calgary) Sopik was under contract with the Stampeders but the season was cancelled because of the global pandemic.

(Calgary) Sopik was in uniform for all 18 regular-season games during his rookie season with the Red and White. He recorded 13 defensive tackles and 10 special-teams stops while adding two sacks, two forced fumbles and a blocked punt. He had a season-high four tackles and his first career sack in a Week 4 game at Saskatchewan. Sopik suffered an injury in the regular-season finale at BC and was sidelined for the Western Semi-Final.

Sopik was the Ontario University Athletics’ first-team all-star at SAM linebacker after recording 38 tackles, one sack and one interception in eight games for the Mustangs in 2018. In 26 career games at Western, Sopik accumulated 107.5 tackles including 11 tackles for loss, one sack, four forced fumbles, three fumble recoveries and two interceptions. He was presented the Bruce Coulter Award as the most outstanding defensive player in Western’s 2017 Vanier Cup victory.

In addition to serving as a team captain on the football team, Sopik played basketball and rugby for the Saints at St. Andrew’s College in Aurora, Ont.