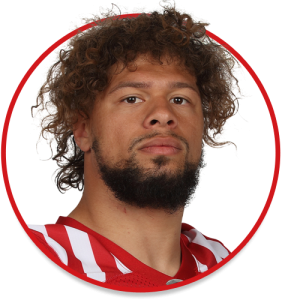 (Calgary) Adeyemi-Berglund played all 14 regular-season games in his rookie campaign including seven starts at defensive end and was Calgary’s nominee for the CFL’s Most Outstanding Rookie award. He recorded 15 defensive tackles, one sack, three special-teams tackles, one fumble recovery and two knockdowns. Adeyemi-Berglund recorded his first career sack in a Week 13 victory at Ottawa. He started at defensive end for the Stamps’ Western Semi-Final game against Saskatchewan and recorded five tackles.

Honoured: Calgary’s nominee for Most Outstanding Rookie in 2021

After redshirting in 2016, Adeyemi-Berglund played 33 games over three seasons (2017-19) at Southeastern Louisiana and totaled 135 tackles including 28 tackles for loss, 15 sacks, six forced fumbles, one fumble recovery, 11 quarterback hurries and 10 pass breakups. He was second-team all-Southland Conference as a senior with the Lions in 2019. Adeyemi-Berglund earned Southland all-academic team honours in 2018 and 2019 and made the conference commissioner’s fall academic honour roll in 2016 and 2017.

Adeyemi-Berglund graduated with a degree in exercise science. He attended Dartmouth High School and was a first-team Nova Scotia all-star at both defensive end and linebacker. He also starred in rugby, helping his school win three league championships. Prior to enrolling at Southeastern Louisiana, he played one season at Champlain Regional College in Lennoxville, Que.