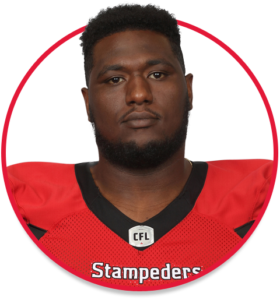 Pro path
Westerman was selected in the first round (second overall) by the BC Lions in 2012 CFL draft. After five seasons with the Lions, he signed as a free agent with the Montreal Alouettes on Feb. 16, 2017. He was released by Montreal on Apr. 4, 2019.

2018
(Montreal) Westerman played seven games for the Alouettes and made six starts. He recorded four tackles including one tackle for loss.

2017
(Montreal) In his first season with the Alouettes, Westerman played 17 games and made 14 starts. He recorded nine tackles and added one sack and one knockdown.

2016
(BC) Westerman played and started 16 games for the Lions. He recorded a career-high five sacks including a two-sack game against Montreal in Week 7. Westerman also had 17 tackles. He was in uniform for both the Western Semi-Final and Western Final and recorded one tackle.

2015
(BC) Westerman dressed for 17 games and started all of them. He established a career high with 21 tackles including six tackles for loss. Westerman also had three sacks, two forced fumbles and one knockdown. He had four tackles in the Lions’ Western Semi-Final loss to Calgary.

2014
(BC) Westerman played 16 games for BC and made six starts. He recorded 17 tackles including five tackles for loss, three sacks and one knockdown. Westerman also played the Eastern Semi-Final game at Montreal and registered a pair of tackles.

2013
(BC) Westerman played all 18 regular-season games, recording 13 tackles, a pair of sacks, two fumble recoveries and one forced fumble. He also recorded his first career interception in Week 4 against Edmonton. Westerman was in uniform for the Lions’ Western Semi-Final game at Saskatchewan.

2012
(BC) In his rookie season, Westerman dressed for all 18 regular-season games and made five starts. He recorded 14 tackles including two tackles for loss and added four sacks, one forced fumble and one knockdown. Westerman was the Lions’ nominee for the league’s Most Outstanding Rookie award and wound up being the West Division finalist for that honour.

College
Westerman played 23 games over two seasons (2010-11) at Eastern Michigan. His career stats for the Eagles included 48 total tackles including nine tackles for loss, 5.5 sacks and one fumble recovery. He transferred to Eastern Michigan from Dodge City Junior College in Kansas.

Personal
Westerman was born in Florida and grew up in Brampton, Ont., after his family moved to Canada in 1999. He is an alumnus of Brampton’s Notre Dame Catholic High School. His older brother Jamaal is a member of the Hamilton Tiger-Cats and the siblings were briefly teammates with the Alouettes in 2018. Another brother – Jawann – played football at Rutgers and was signed by the Winnipeg Blue Bombers in 2012.