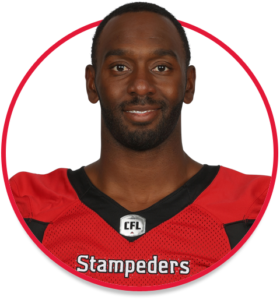 Wall was selected in the sixth round (196th overall) by the Dallas Cowboys in the 2010 National Football League draft. After attending training camp with Dallas, he played for the Houston Texans and the Philadelphia Eagles during the 2010 season. He signed with the Arena Football League’s Georgia Force on Feb. 2, 2012.

(Calgary) Wall served as one of the team captains and appeared in 16 regular-season contests, starting each game at the SAM position. He finished fourth on the club 67 defensive tackles including two tackles for loss. He added one special-teams stop, one sack and three knockdowns. Wall also started the Western Semi-Final at SAM and had four tackles including one tackle for loss.

(Calgary) Wall played 15 regular-season games and made 15 starts at the SAM position while serving as one of the team captains. He made 36 tackles including two tackles for loss and added two sacks, one forced fumble, two fumble recoveries and three knockdowns. A Week 7 contest at Saskatchewan was his 100th career regular-season game. Wall started both post-season games, recording three tackles and two knockdowns in the Western Final and four tackles, one interception and one knockdown in the Grey Cup.

(Calgary) Wall started 18 all regular-season games and had 55 tackles, a forced fumble, a fumble recovery, two interceptions and five knockdowns. He had an interception and a forced fumble in a Week 1 game in Ottawa. Wall started both post-season games, recording one tackle in the Western Final and two tackles including one tackle for loss as well as one quarterback pressure in the Grey Cup.

(Calgary) Wall started all 18 games including one at safety. He earned West Division and CFL all-star honours after recording 47 tackles including two tackles for loss. He added three forced fumbles, a team-leading 17 knockdowns and four interceptions returned for a total of 118 yards including a 60-yard touchdown. Wall started in the Western Final and recorded one tackle and returned an interception 42 yards for a touchdown. He also started in the Grey Cup and registered five tackles. Before Game 14, he decided to wear jersey No. 31 for the rest of the season in honour of his late teammate Mylan Hicks.

(Calgary) Wall started all 18 games at halfback and had 70 tackles including one tackle for loss, two interceptions returned for 39 yards and one touchdown, a fumble recovery, two special-teams tackles and a team-high 10 knockdowns. He also had one punt return for six yards. On Aug. 29 against Winnipeg, he registered his second career pick-six when he intercepted a Robert Marve pass and returned it 29 yards to the end zone. Wall also started both playoff games and recorded seven tackles and a knockdown.

(Calgary) Wall started 18 games at halfback and had 62 tackles, a tackle for a loss of three yards, two special-teams tackles and tied for the team lead with five knockdowns. He led the team and tied the league-lead with six interceptions for 130 yards, including his first career pick-six — a 50-yarder against Saskatchewan on Oct. 24. Wall started the Western Final and recorded four tackles. He also started in the Grey Cup where he registered four tackles. Wall was named a West Division all-star, a CFL all-star and a CFLPA all-star.

(Calgary) Wall played 12 games and had 41 tackles, two knockdowns, two fumble recoveries and tied for the team lead with four interceptions. On Oct. 18 against Edmonton, he blocked a punt, scooped up the ball and ran it to the end-zone for a 19-yard touchdown. He was on the injured list for Games 3 and 4 and the reserve list for Games 5, 10, 11 and 15. Wall also played in the Western Final and recorded three tackles, one special-teams tackle, one knockdown and one fumble return for 43 yards.

(Calgary) Wall appeared in 13 games during his first CFL season and made 12 starts seeing action both at halfback and cornerback. He made 33 tackles, including one tackle for an 11-yard loss. Wall also had three pass knockdowns, two sacks and one special-teams tackle. He made his CFL debut on July 12 against Montreal and recorded one tackle. He recorded sacks against Edmonton on Labour Day and against Winnipeg on Sept. 14. He had a season-high five tackles on Aug. 25 against Saskatchewan.

Leader: Tops on Stamps and shared league lead with six interceptions in 2014

Wall played 49 games over four seasons at Texas Tech (2006-09) and was a starter for three years. Over the course of his Red Raiders career, he recorded 185 tackles including three tackles for loss, 34 pass breakups and nine interceptions. He also returned 23 kickoffs for 513 yards and eight punts for 57 yards. In Texas Tech’s dramatic victory over top-ranked Texas in 2008, Wall helped set up the Red Raiders’ last-second game-winning touchdown by returning a Longhorns kickoff 38 yards. Wall was named the defensive MVP of the Alamo Bowl in 2009, his senior season, after recording six tackles and an interception against Michigan State. He was second-team all-Big 12 Conference in 2007 after leading the team with five interceptions.

Wall was a running back, defensive back and punter for Plainview High School and rushed for 2,735 yards and 42 touchdowns during his senior season.