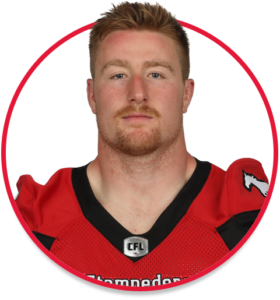 (Calgary) Reinhart attended training camp for the Stampeders before returning to the University of Guelph for his final season. He played one pre-season game for the Stamps.

Reinhart played 39 games over five seasons (2015-19) at Guelph, seeing action both as a linebacker and a long snapper. His career stats with the Gryphons included 130.5 total tackles, nine sacks, two forced fumbles, three interceptions and two pass breakups. In 2019, he recorded 44.5 tackles including 8.5 tackles for loss, 4.5 sacks, one forced fumble and one pass breakup as well as two kickoff returns for 23 yards. Reinhart was Guelph’s second-leading tackler in 2018 with 44.5 stops. He also had one sack and two interceptions.

Reinhart played quarterback at Guelph Collegiate Vocational Institute before transitioning to linebacker in Grade 12. His brother Jake plays for the Toronto Argonauts.