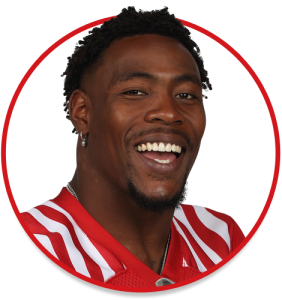 (Calgary) Carey was Calgary’s nominee for the CFL’s Most Outstanding Player award and was voted a West Division all-star after making 13 starts at tailback and carrying the ball 164 times for 869 yards (an average of 5.3 yards per attempt) and seven touchdowns. The rushing majors led all CFL running backs. Carey also had 26 catches for 194 yards and made two tackles. He had two rushing touchdowns in a Week 3 win over Montreal and he earned a CFL top performer award after accumulating 109 rushing yards and 178 yards from scrimmage in Week 10 at Saskatchewan. He also had a 100-yard rushing game at Ottawa in Week 13. Carey started the Western Semi-Final and had 22 carries for 117 yards and two touchdowns as well as three catches for 19 yards.

(Calgary) Carey was under contract with the Stampeders but the season was cancelled because of the global pandemic.

(Calgary) Carey saw action in eight games including seven starts. He compiled a team-leading 422 yards on 75 rushing attempts for an average of 5.6 yards per carry while scoring two touchdowns. He also had 15 catches for 134 yards and one major and scored a special-teams touchdown in Week 5 in Hamilton when he blocked a punt, recovered the loose ball and ran it into the end zone. Carey’s most productive rushing game of the season was a 143-yard performance in a Labour Day Classic victory over Edmonton. He missed the final five games of the regular season as well as the Western Semi-Final with an arm injury suffered in a Week 15 contest in Toronto.

(Calgary) Carey joined the club on Oct. 3 and spent the rest of the season on the practice roster.

Classic performance: Ran for 143 yards in a 2019 Labour Day win over Edmonton

Honoured: CFL top performer for Week 10 of the 2021 season

Honoured: Calgary’s nominee for Most Outstanding Player in 2021

Carey was a standout at Canyon del Oro High School in Arizona, rushing for 4,492 yards and 71 touchdowns over his final two seasons. During his NFL career, he had 443 rushing yards and two touchdowns as well as 13 catches for 131 yards and one score.