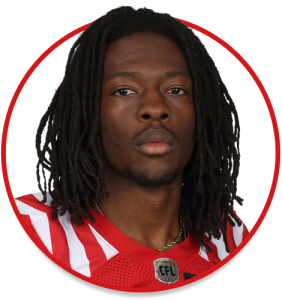 (Calgary) After starting the season on the practice roster, Hakunavanhu made his CFL debut in Week 7 at Hamilton and had four receptions for 88 yards including a 74-yard catch-and-run play. He played four regular-season games had eight catches for 201 yards and two touchdowns as well as one punt return for 15 yards. His first career major came in a Week 11 victory at BC. In Week 16 in his McMahon Stadium debut, his 57-yard catch-and-run score sparked the Stamps’ comeback victory against Winnipeg. Hakunavanhu also played in the Western Semi-Final and had two catches for 15 yards.

Hakunavanhu played three seasons (2017-19) at York and appeared in 22 games. He registered 69 receptions for 951 yards and six touchdowns during his collegiate career. He started all eight games in 2019 and led York in receiving yards (470) and touchdowns (three) while finishing second in receptions with 29. He earned an invitation to the 2020 East-West Bowl.

Hakunavanhu is an alumnus of Edmonton’s McNally High School, where he played both football and basketball.