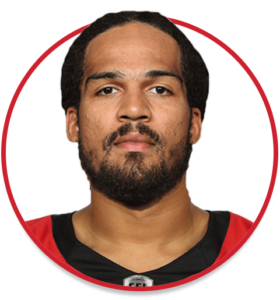 2018
(Toronto) Ball played and started 10 games, amassing 44 defensive tackles including three tackles for loss, one special-teams tackle, one interception, one forced fumble, one fumble recovery and one knockdown.

2013
(Toronto) Ball started 16 games for the Argos, accumulating 69 defensive tackles including four tackles for loss, one special-teams tackle, four sacks, one forced fumble, two fumble recoveries, five knockdowns and three interceptions including one that he returned for a major. The interception-return touchdown came in Week 14 at Edmonton. Ball recorded a pair of sacks in a Week 10 contest against Montreal. He played in the Eastern Final and recorded four defensive tackles, one special-teams tackle and one sack.

2012
(Toronto) Ball appeared and started in 16 regular-season games during his first CFL season. He recorded 75 defensive tackles including three tackles for loss, four special-teams tackles, three sacks, one forced fumble, six knockdowns and one interception that he returned 27 yards for a touchdown. The pick-six happened in a Week 14 game at Winnipeg. Ball had a two-sack performance against the Hamilton Tiger-Cats during the Labour Day Classic in Week 10. Ball was in uniform for both the Eastern Semi-Final against Edmonton and the Eastern Final against Montreal and had a combined three interceptions in the two games as well as nine tackles. He had five tackles in the Argos’ Grey Cup win over Calgary.

College
Ball played his junior and senior seasons (2009-10) at the University of Memphis. In 19 games for the Tigers, he recorded 105 total tackles, including two tackles for loss, and four interceptions. He played at Pearl River Community College in 2008 and earned first-team all-American honours. He started his collegiate career at Florida State in 2006 and 2007. Ball appeared in three games as a freshman before suffering a season-ending injury and being granted a redshirt season. In 12 career games for the Seminoles, he recorded 37 tackles including 1.5 tackles for loss, one sack and one interception.

Personal
Ball is an alumnus of Stephenson High School in Stone Mountain, Ga. He recorded 150 tackles and three interceptions during his senior season at Stephenson.