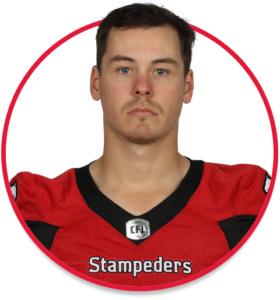 2017
(Calgary) Caron played 17 games at long snapper and had six special-teams tackles. He was placed on the one-game injured list for Game 3. Caron played in both post-season games and sealed the Stamps’ Western Final victory when he recovered the loose ball after a fumbled punt.

College
Caron was a linebacker and four-year first-string long snapper for Laval. In 2015, he had 7.5 tackles and was a key part of a Laval special-teams unit that led the Quebec conference in field-goal percentage and was second in punting average.

Personal
Prior to going to Laval, Caron played football at Kent School in Connecticut.