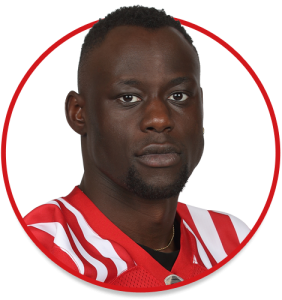 (Calgary) Sindani played all 14 regular-season games including one start and had 26 catches for 262 yards and two touchdowns. He also was a starter for the Western Semi-Final. Sindani had a season-long catch of 35 yards in Week 2 against BC and a career-best six catches for 60 yards in Week 11 at BC. Sindani’s first career touchdown came in a Week 7 contest at Hamilton.

(Calgary) Sindani was under contract with the Stampeders but the season was cancelled because of the global pandemic.

(Calgary) Sindani appeared in 15 regular-season games including one start and established new career highs with 32 catches and 362 receiving yards. He also had a catch for a two-point convert and a career-long 51-yard reception against Edmonton in the Labour Day Classic. Sindani had three games in which he made four receptions. He was also in uniform for the Western Semi-Final.

(Calgary) Sindani played all 18 regular-season games during his rookie season and made eight catches for 107 yards in a reserve role. He also saw action on special teams and made three tackles. He made his CFL debut against Hamilton in Week 1 and had a 13-yard reception. Sindani had two catches for 43 yards including a season-high 30-yarder in the Labour Day Classic against Edmonton. He played both post-season games and had three catches for 44 yards in the Western Final.

(Calgary) Sindani attended training camp with the Stampeders before joining the University of Calgary Dinos. In two pre-season contests for the Stamps, he had two catches for 34 yards and one touchdown.

Sindani played his high-school football at Campbell Collegiate in Regina, earning league all-star honours in his senior season. He played for Saskatchewan at the 2012 Football Canada Cup.