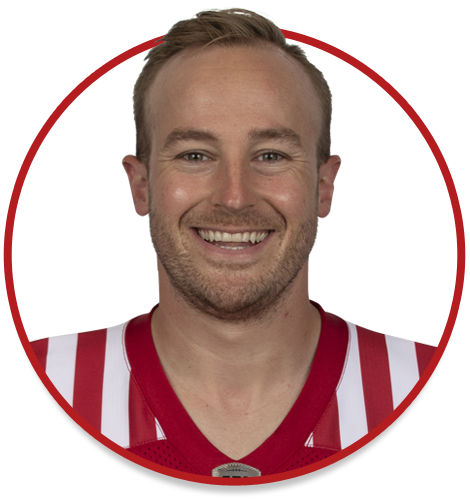 Pfeffer attended training camp with the Ottawa RedBlacks in 2015 and signed with the Toronto Argonauts on July 1, 2015. He played six games for Toronto before being released and he signed with Ottawa on Aug. 26, 2015. Pfeffer rejoined the Argos on June 12, 2017.

(Calgary) Pfeffer was under contract with the Stampeders but the season was cancelled because of the global pandemic.

(Toronto) Pfeffer played 12 games for Toronto and ranked fourth in the CFL with a punting average of 44.9 yards and second with a net average of 37.7 yards. He punted 76 times for 3,412 yards and twice pinned the opposition inside the 10-yard line.

(Toronto) Pfeffer missed the entire season due to injury.

(Ottawa) Pfeffer missed the entire season due to injury.

(Toronto/Ottawa) After attending training camp with Ottawa, Pfeffer signed with Toronto and played six games, converting 12 of 16 field goals and 11 of 13 converts and accounting for a total of 49 points. He also punted 38 times for 1,675 yards (44.1 average; 38.8 net) with four punts inside the 10-yard line. Pfeffer was released when Swayze Waters was activated from the injury list and he signed with Ottawa a week later. He played five games for Ottawa and punted 25 times for 1,044 yards (41.8 average; 32.0 net) with two punts inside the 10. Between the two teams, he had 49 kickoffs for 2,896 yards (59.1 average).

Pfeffer played four seasons for Wilfrid Laurier and was an Ontario all-star on two occasions and the country’s first-team all-star punter in 2014. Over his career with the Golden Hawks, he punted 278 times for 10,010 yards (36.0 average) and converted 57 of 81 field-goal attempts.

Pfeffer was a soccer player at Cameron Heights Collegiate Institute in Kitchener, Ont., before making the switch to football in Grade 12.