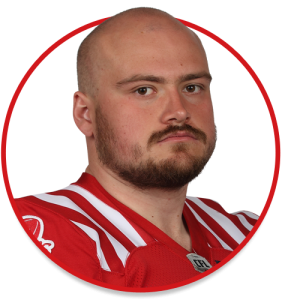 (Calgary) Sceviour played 11 regular-season games, serving as the starter at right guard. He was part of a unit that allowed the second-fewest sacks in the league and blocked for Ka’Deem Carey, who led all running backs with seven rushing touchdowns and was second in the league in both rushing yards and yards from scrimmage. Sceviour also started the Western Semi-Final at right guard. He missed three games (Weeks 5-7) with a foot injury.

(Calgary) Sceviour was under contract with the Stampeders but the season was cancelled because of the global pandemic.

(Calgary) Sceviour started all 18 games for Calgary including 17 at right guard and one at left guard. He helped the Stamps allow the second-fewest sacks in the CFL and was part of a Calgary offence that ranked in the top third in a number of categories. Sceviour also started at right guard in the Western Semi-Final.

(Calgary) In his rookie season, Sceviour saw action in one game – a Week 13 contest at Edmonton – as a reserve offensive lineman.

Sceviour played five seasons at the University of Calgary (2013-17) and dressed in 43 games in his career. He was named a second-team all-Canadian in 2016 and 2017 and helped the Dinos’ offence rush for 1,275 yards in 2017, good for the second-best total in Canada West.

Sceviour is an alumnus of Calgary’s Bowness High School. His 22 reps on the bench press at the 2018 CFL draft combine tied for third among all players at the event.