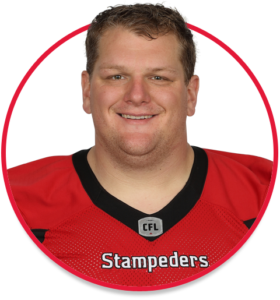 2018
(Calgary) Bergman started all 18 regular-season games at left guard and was part of an offensive line that was tied for the fewest sacks allowed in the CFL this season with 27. He was also a starter for both the Western Final and the Grey Cup.

2016
(Calgary) Bergman started 15 regular-season games, the Western Final and Grey Cup at left guard. He was on the one-game injury list for Games 12 and 17 and the reserve list for Game 18.

2015
(Calgary) Bergman started 16 games at left guard. He was on the one-game injury list for Games 8 and 18. He started the Western Semi-Final but was injured and missed the Western Final.

2014
(Calgary) Bergman started 14 games at left guard. He began the season on the one-game injury list and first got into the lineup on Aug. 1 against BC. He also started the Western Final and Grey Cup.

2013
(Calgary) Bergman began the season on the nine-game injured list. He was moved to the practice roster after Game 9 and played one game (one start) in the final game of the season on Nov. 1 in BC.

College
In 2012, Bergman was part of a Mustangs offensive line that helped Western lead the CIS with 289.1 rushing yards per game. Western running back Garret Sanvido led the country in 2012 with 1,001 rushing yards and the Mustangs were third in total offence with 40.9 points and 535.1 yards per contest. Bergman played six regular-season games and one playoff contest for the Mustangs in the 2012 season.

Personal
Bergman played at Waterford District High School in Norfolk, Ont., and helped the Wolves win a league championship in 2009.