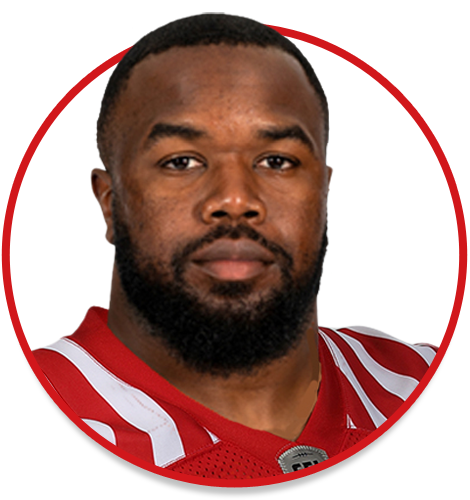 (Calgary) In his return to the Stampeders after a six-year absence, Lemon played 11 regular-season games and made nine starts at defensive end. He has 26 tackles including a tackle for a loss, a team-leading eight sacks, two forced fumbles and two knockdowns. He had three sacks in the Stamps’ Week 6 victory in Edmonton. Lemon started the Western Semi-Final and made one tackle for loss.

(Toronto/BC) Lemon started the season with Toronto and recorded 15 tackles including one tackle for loss, one sack and one knockdown in four games. He was traded to BC on Aug. 12 and played 10 games for the Lions, registering 19 tackles including two tackles for loss, eight sacks, three forced fumbles and two knockdowns.

(Toronto/BC) Lemon played five games for Toronto and had five tackles, two knockdowns, one sack, one fumble recovery and one forced fumble. He was traded to BC on July 14 and in 13 games for the Lions, he registered 16 defensive tackles including two tackles for loss, one special-teams tackle, 10 sacks, three knockdowns one fumble recovery. Lemon was also in uniform for BC’s Eastern Semi-Final contest against Hamilton.

(Toronto) Lemon appeared in 12 games for the Argos and recorded 18 tackles, eight sacks, one forced fumble and on knockdown. He had three sacks against Saskatchewan in the Eastern Final and was also in the lineup for the Argos’ Grey Cup victory.

(Saskatchewan/Toronto) After playing one game with the Roughriders to start the season, Lemon was traded to Toronto and played 16 games while earning East Division all-star honours. He recorded a career-high 14 sacks for the Argos and added 23 tackles, five forced fumbles, one fumble return and two knockdowns.

(Ottawa) Lemon played and started nine games for the Redblacks, recording 15 tackles including two tackles for loss and six sacks. He added three forced fumbles and four knockdowns. Lemon played in the Eastern Final and had four tackles and a sack in the Redblacks’ Grey Cup loss to Edmonton.

(Calgary) Lemon started all 18 regular-season contests for the Stampeders and tied a CFL record with eight forced fumbles in a single season. He recorded 13 sacks and also had 31 defensive tackles including five tackles for loss, one special-teams tackle and one interception. Lemon had three tackles in the Western Final and one tackle and one sack in the Stamps’ Grey Cup victory over Hamilton.

(Calgary) In his first season with the Stampeders, Lemon played six games and made five starts. He recorded 18 tackles including one tackle for loss and recorded three sacks. He also had one fumble recovery. Lemon recorded six tackles in the Stamps’ Western Final contest against Saskatchewan.

(Edmonton) After starting the season on Edmonton’s practice roster, Lemon appeared in 12 regular-season games and made 11 starts. He also played in Edmonton’s semifinal contest against Toronto. During the regular season, Lemon was tied for the team lead with six sacks and also had 16 tackles, two knockdowns, two fumble recoveries and one forced fumble.

(Saskatchewan) Lemon played a single game in his rookie season and did not record any stats.

Record: Tied the CFL record with eight forced fumbles in 2014

Honoured: Stampeders’ nominee for Most Outstanding Defensive Player in 2014

Honoured: Argonauts’ nominee for Most Outstanding Defensive Player in 2016

Lemon played 41 games over four seasons (2007-10) at Akron and was a three-year starter for the Zips. He recorded 102 career tackles including 23 tackles for loss as well as 11 sacks, six forced fumbles and five fumble recoveries. Lemon was all-Mid-American Conference as a senior as he led the team with seven sacks and four fumble recoveries. He also had 39 tackles including 10.5 tackles for loss and three forced fumbles.

Lemon played at Westlake High School in Maryland and as a senior in 2005, he set a conference record with 21 sacks in a single season. He also competed in basketball and track and field and was an honour-roll student.