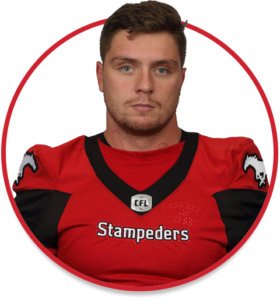 2018
(Toronto) Gingras-Gagnon played eight games for the Argonauts and had one carry for 11 yards. He also had two receptions for eight yards and one special-teams tackle.

College
Gingras-Gagnon played nine games over two seasons at Laval. He was named a 2017 Quebec conference all-star for his work as a fullback on a Rouge et Or offence that led the conference with 33.2 points scored per game and 160.6 rushing yards per contest. Gingras-Gagnon caught four passes for 31 yards and two touchdowns and rushed the ball once for nine yards. He won the Dunsmore Cup as a member of the conference-champion Rouge et Or in 2016 and 2017 as well as the Vanier Cup national championship in 2017. Gingras-Gagnon spent the 2014 season as a receiver at McGill where he caught five passes for 71 yards in and a touchdown in seven games.