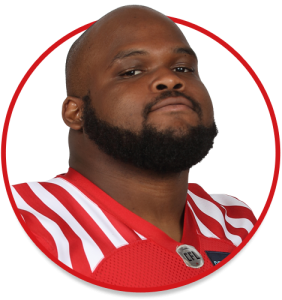 Rayam attended mini-camp with the National Football League’s Kansas City Chiefs in May of 2022.

Rayam played 49 career games and made 26 starts over five years (2017-21) at Boston College. During his career with the Eagles, he recorded 101 tackles including 11.5 tackles for loss, two sacks, one forced fumble and two passes defended. His best season came in 2019 as a sophomore as Rayam made 12 starts at nose tackle and recorded 41 tackles including 6.5 tackles for loss.

Rayam is an alumnus of Thompson High School in Alabaster, Ala., and he spent one year at the Peddie School in Highstown, N.J., before enrolling at Boston College. His father Thomas was an offensive lineman whose 10-year professional career included three seasons and a 2001 Grey Cup championship ring as a member of the Stampeders.