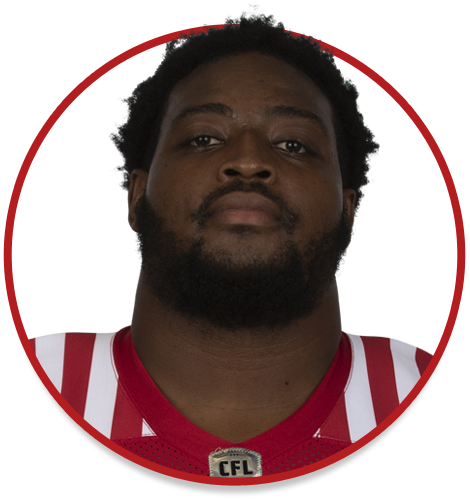 (Calgary) Williams started 16 regular-season games including 12 at centre and four at left tackle. He was part of an offensive line that allowed just 34 sacks, the second-lowest total in the league. He was on the one-game injury list for Week 6 and Week 14. Williams was the starter at centre for the Stamps’ Western Semi-Final contest against Winnipeg.

(Calgary) Williams started 15 regular-season games at centre and was part of an offensive line that was tied for the fewest sacks allowed in the CFL with 27. Williams was also a starter for both the Western Final and the Grey Cup.

(Calgary) Williams started 18 games at centre and he recorded one tackle. He was the Stamps’ nominee for Most Outstanding Offensive Lineman and was named a West Divison all-star. He also started the Western Final and the Grey Cup.

(Calgary) Williams had three regular-season starts at right tackle and started the Grey Cup at right guard. He began the season on the practice roster. He was on the one-game injury list for Games 6 – 8 and the reserve list for Game 12.

Honoured: Stamps’ nominee for Most Outstanding Offensive Line in 2017

Williams played four seasons at South Alabama and made 28 starts over his final three seasons (2012-14) with the Jaguars. He was second-team all-Sun Belt Conference as a junior in 2013.

His full name is Ucambre Jakieron Thembiance Williams. He was a captain for the football and basketball teams for Central High School in Phenix City, Ala.