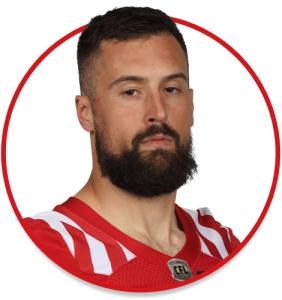 (Calgary) Langlais made 12 starts at fullback. He had one reception for five yards, four special-teams tackles and two kickoff returns for 58 yards. He also started the Western Semi-Final and had one kickoff return for 12 yards.

(Calgary) Langlais was under contract with the Stampeders but the season was cancelled because of the global pandemic.

(Calgary) Langlais appeared in nine regular-season games for the Stamps and made eight starts at fullback. He had four receptions for 54 yards including a career-long 33-yarder, one carry for three yards and one special-teams tackle. He missed a total of nine games over two stints on the injured list. Langlais returned to the field for the regular-season finale and also played in the Western Semi-Final. He had one kickoff return for 13 yards and one special-teams tackle in the playoff game.

(Calgary) In his fourth season with the Stampeders, Langlais took over the starting fullback role and made 16 regular-season starts. In addition to his blocking work, he established career highs with six receptions for 105 yards. Langlais had a career-best 33-yard reception in a Week 21 contest at BC. He also saw special-teams action and made nine tackles. Langlais started both of Calgary’s post-season games and had one kickoff return for 15 yards.

(Calgary) Langlais played 16 games and had 17 special-teams tackles. He also played in the Western Final and Grey Cup. Langlais was on the one-game injury list for Weeks 18 and 19.

(Calgary) Langlais played 17 games and had 11 special-teams tackles. He was on the one-game injury list for Week 17. Langlais also played both playoff games.

The converted defensive lineman played fullback for Sherbrooke in 2014 and helped the Vert et Or rank ninth in Canadian university rushing. Langlais carried the ball four times for 14 yards and added five receptions for 44 yards while also seeing duty on special teams.

Langlais played at Cegep Beauce-Appalaches in Saint-Georges, Que., before enrolling at Sherbrooke.