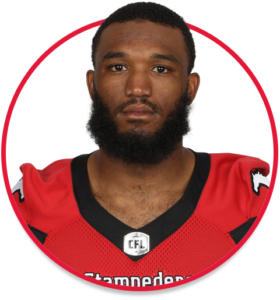 Pro path
McManis signed with the National Football League’s San Francisco 49ers as an undrafted free agent in 2016 and he attended training camp. He joined the 49ers’ practice roster on Nov. 29, 2016, and was activated for the final two games of the season. San Francisco released McManis on May 2, 2017.

2017
(Calgary) McManis played 12 games and had two defensive tackles, seven special-teams tackles and two QB sacks. Both sacks came in his CFL debut in Week 3 against Winnipeg. McManis began the season on the practice roster and was placed on the six-game injury list prior to Game 15.

College
McManis played 47 games over four seasons (2012-15) at Memphis. He was a team captain during his senior season and recorded 63 total tackles including 5.5 tackles for loss and 2.5 sacks. His career totals with the Tigers were 111 total tackles including 9.5 tackles for loss, 2.5 sacks, two forced fumbles, one fumble recovery and two pass breakups.

Personal
McManis played quarterback and linebacker for Olive Branch High School in Olive Branch, Miss. During his senior season, he was part of a team that went undefeated and won a state championship.