From Hood to Laird and from No. 5 to No. 75, the Stampeders have retired seven numbers over the years 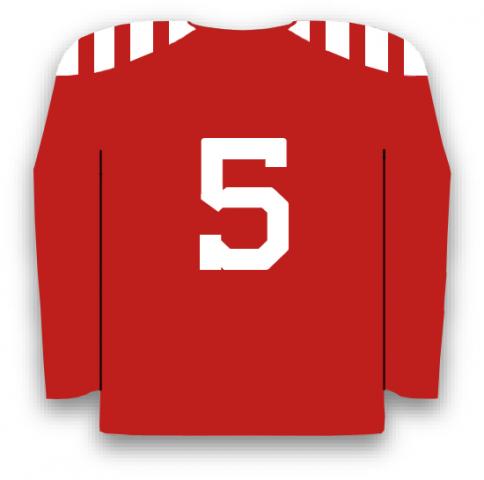 Hood was one of several players to move to Calgary from Winnipeg with coach Les Lear in 1948 and help the Stampeders to an undefeated season and their first Grey Cup championship. The title was clinched with a 12-7 victory over the Ottawa Rough Riders.

A two-way performer, the shifty Hood scored four touchdowns and ran for 200 yards from the halfback position during the championship campaign. He contributed as a back up to starting quarterback Keith Spaith and played defence as the Stamps rolled to a 12-0 regular-season record.

Hood was also with the Stamps in 1949 when the club rolled to a 13-1 record and a berth in the Grey Cup final against the Montreal Alouettes. Despite a Hood touchdown in the championship match, the Stamps fell 28-15 to the Larks.

Hood had previously played in three straight titles from 1945-47 under Lear in Winnipeg.

The Winnipeg native played a total of 70 games in five seasons for Calgary, retiring after the 1952 campaign. He racked up 1,131 rushing yards and 42 catches for 813 receiving yards.

His No. 5 was retired in 1954 after Hood lost his battle with cancer at the age of 31. The Calgary Senior High Schools Athletic Association instituted the Harry Hood Memorial Trophy in his honour, with the award presented annually to the outstanding senior high school football player in the city. 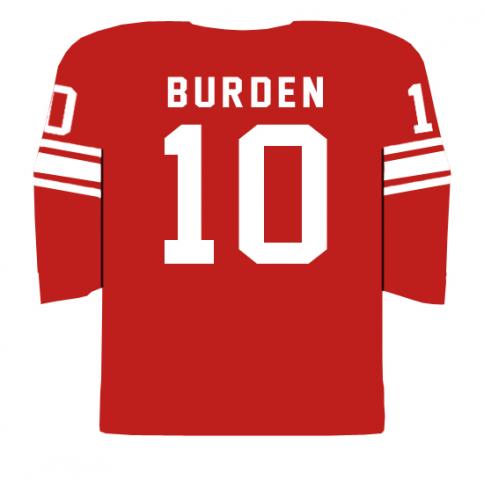 One of the greatest running backs in franchise and league history, Burden is probably best remembered for setting the single-season CFL record in 1975 with 1,896 rushing yards.

The mark has since been broken by Mike Pringle in 1994 and again in 1998, but the Baltimore/Montreal runner did it in 18 games compared to just 16 for Burden. The Calgary running back’s average of 118.5 rushing yards per contest over a full season remains the best of all time. In a Nov. 2 contest against Winnipeg that season, Burden ran for 238 yards to tie Lovell Coleman’s team record.

Burden was named the CFL’s Most Outstanding Player in 1975 for his record-breaking efforts, one of just five Stampeders to capture that award.

Besides the rushing mark, Burden still holds Stampeders records for 100-yard games in a single season (10) and most consecutive 100-yard games (five). He cracked the 1,000-yard plateau again in 1977 and was named as a West Division all-star.

He finished his stellar career in 1981 with a total of 6,234 rushing yards, the third-highest total by a Calgary player at the time of his retirement, and 32 touchdowns. He added 299 catches and 16 receiving touchdowns.

The fleet North Carolina State product was elected to the Canadian Football Hall of Fame in 2001. 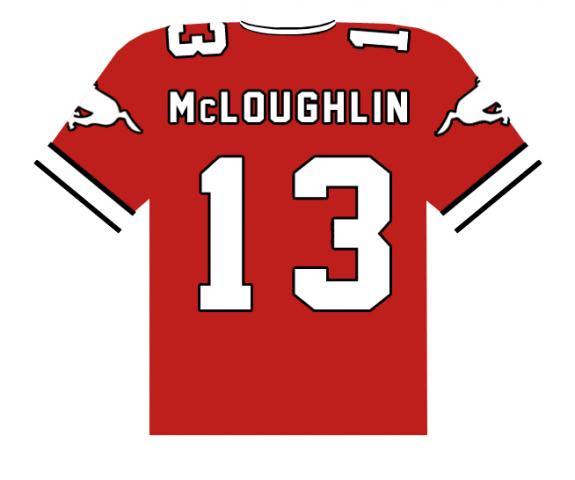 With 16 years of service and 276 games with the Stampeders, no one played longer for the Red and White than McLoughlin. His 2,957 points are the most in Calgary franchise history and his 2,996 career points, which include a single season with the BC Lions, represent the second-best total in CFL history behind Lui Pasaglia.

McLoughlin added 266 playoff points for the Stampeders, including the game-winning field goal on the final play of the 1998 Grey Cup against the Hamilton Tiger-Cats. It was one of three championships for McLoughlin, who joins linebacker Alondra Johnson as the only men to win three titles with the Red and White. All told, McLoughlin played in six Grey Cup games for Calgary in addition to 11 West finals and eight semifinals. In the pressure of post-season competition, he had an impressive 83 per cent success rate on field goals.

The Liverpool-born, Winnipeg-raised McLoughlin was a division all-star on six occasions and was an all-Canadian in 1994, 1996 and 1999. He was voted by teammates as the Presidents’ Ring Award recipient for on-field excellence and leadership in 1998. 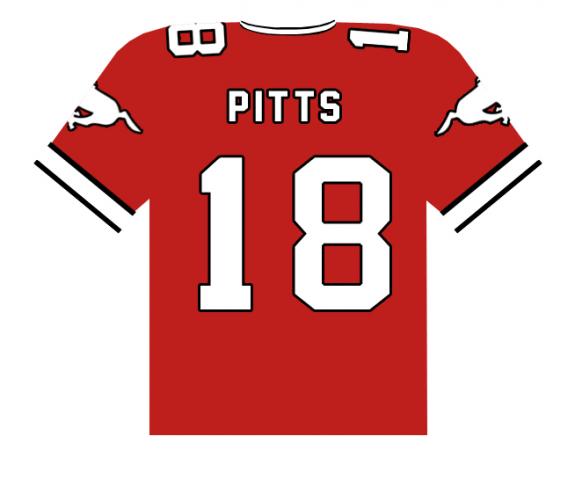 No matter what quarterback was putting up gaudy passing numbers for the Stampeders in the 1990s — Danny Barrett, Doug Flutie, Jeff Garcia or Dave Dickenson — the one constant for each passer is that Allen Pitts was his favourite downfield target. The rangy Cal State Fullerton alumnus established and continues to hold numerous Calgary receiving records after a dazzling 11-year career with the Red and White.

Pitts held many of the major CFL receiving records at the time of his retirement, several of which — most receiving yards in one season, most 100-yard games in a season and in a career — still stand.

Pitts played in five Grey Cup games for Calgary, making a total of 25 catches for 365 yards and three touchdowns while winning championships in 1992 and 1998. He was a seven-time division all-star and a six-time all-Canadian and was voted by teammates as the Presidents’ Ring Award recipient for on-field excellence and leadership in 1999. He entered the Canadian Football Hall of Fame in 2006. 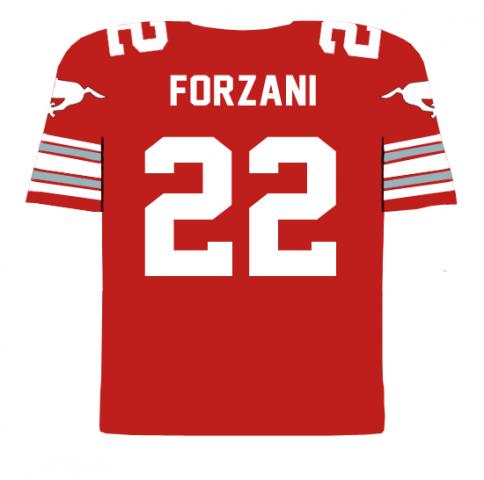 The steady Calgarian spent his entire CFL career with the Stampeders and ranks among the leaders in most significant receiving categories on the all-time franchise list.

He had seven seasons with at least 50 catches and was a Canadian all-star in 1977 on the strength of 51 receptions for 894 yards and five touchdowns.

Forzani broke into the CFL with a 62-catch season in 1973 and was the Stampeders’ nominee for rookie of the year as well as a member of the West Division all-star team. He was a West all-star again in 1974 and 1977 and he was nominated as Calgary’s top Canadian on four occasions. He led Calgary in receiving five times and was second in three other seasons.

Stampeders football was a family affair for the Forzanis as brothers Tom, John and Joe played together for three years from 1973-75.

He finished his 11-year career with 553 catches for 8,285 yards and 62 receiving touchdowns. All three of those figures place Forzani second on the Stampeders’ all-time list. He was added to the Calgary Stampeders Wall of Fame in 1994. 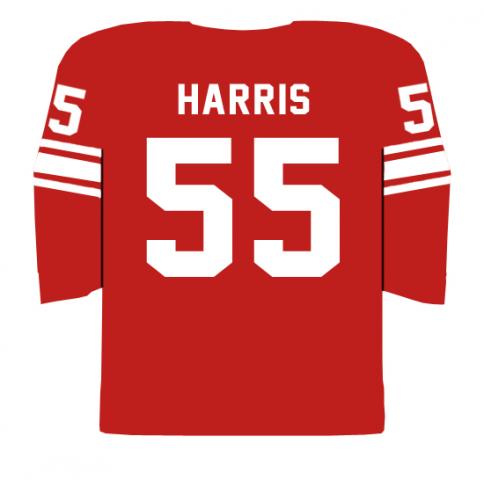 For starters, Wayne Harris had one of football’s all-time great nicknames — Thumper.

More importantly, the Arkansas Razorbacks alum had the game to back up that hard-hitting handle as he was one of the CFL’s all-time great defenders. He was nominated for the league’s Outstanding Lineman Award on nine separate occasions and won four times — in 1965, 1966, 1970 and 1971.

Harris was a West Division all-star an amazing 11 consecutive seasons and was all-Canadian eight times. For the first part of his Calgary career, Harris played on both sides of the ball as he also played on the offensive line. He is the Stampeders’ all-time leader in fumble recoveries with 24 and is second all-time with 28 interceptions.

The crowning achievement of his Stampeders career came in 1971, his penultimate season. With five tackles, three assisted tackles and a fumble recovery, Harris was named the Most Valuable Player of the Grey Cup as the Stamps downed the Toronto Argonauts 14-11 at Vancouver’s Empire Stadium.

Harris was twice voted by teammates as the Presidents’ Ring Award receipient for on-field excellence, leadership and motivational skill. He was elected to the Canadian Football Hall of Fame in 1976 and he was part of the inaugural group added to the Stampeders Wall of Fame in 1985. 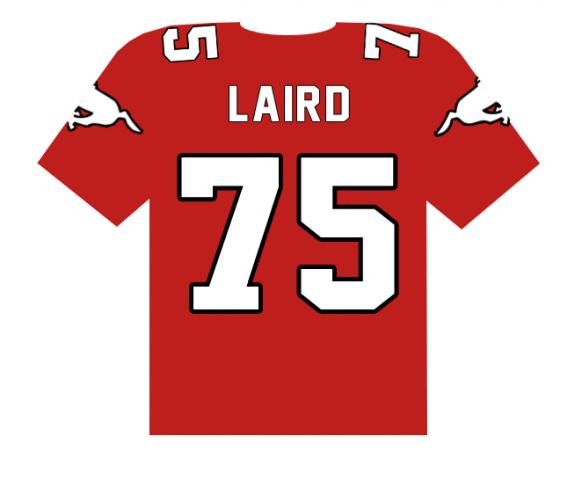 With 12 seasons and 170 career regular-season games under his belt, Laird is one of the longest-serving players in the history of the Stampeders. Only three players — Mark McLoughlin, Larry Robinson and Jay McNeil — wore the Red and White longer than the home-grown product of Lord Beaverbrook high school and the University of Calgary.

A disruptive force on the defensive line, Laird registered 73 career quarterback sacks to rank second on the Stampeders’ all-time list in that category and first in the history of the CFL among Canadian players. His best season came in 1988 as he sacked the quarterback 11 times, made 54 tackles and recovered three fumbles.

Laird is a three-time winner of the Presidents’ Ring Award as voted by his teammates. He received the award for on-field excellence, leadership, inspiration and motivational skills in 1988, 1992 and 1995. He went to the Grey Cup three times with the Stamps, winning a championship in 1992.

Laird also made his mark off the field as one of the most community-minded players ever to wear the Calgary uniform. In 1991, he won the CFL’s Tom Pate Memorial Award for outstanding sportsmanship and dedication to the league and the community. He was the Stamps’ nominee for the Pate award a total of three times.