While this game is best known for an infamous gaffe by the Toronto Argonauts’ star player — running back Leon McQuay — the Calgary Stampeders deserved full credit for winning the second Grey Cup in franchise history.

Calgary’s defence sacked Toronto quarterback Joe Theismann six times, broke his nose and held the Argos without an offensive touchdown in a 14-11 win in Vancouver on Nov. 28, 1971. 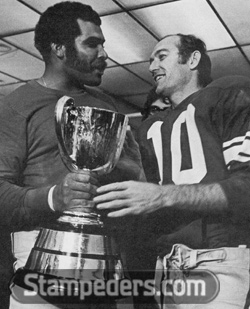 The Stamps opened the scoring on a 14-yard pass from Jerry Keeling to Herm Harrison. After Toronto’s Ivan MacMillan kicked an 11-yard field goal, Jesse Mims scored a six-yard touchdown run that gave Calgary a 14-3 advantage at halftime.

The game was played in soggy conditions on Empire Stadium’s artificial turf and the Argos got their lone touchdown when Calgary fumbled a punt. Joe Vijuk recovered and pitched to Roger Scales, who ran 33 yards for a score. MacMillan then kicked a rouge to make the score 14-11.

The Argos had a chance to win in the fourth quarter when McQuay — the East Division’s Outstanding Player nominee in 1971 — committed one of the most famous turnovers in Cup history. Toronto faced a second-and-seven situation from Calgary’s 11-yard line. McQuay was expected to put the ball in range for MacMillan to kick a field goal to tie the score. Instead, McQuay fumbled, Reggie Holmes recovered for the Stamps and Calgary dodged a bullet.

With 1:53 left, the Stamps started deep in their own end and failed to gain a first down. They punted to give the Argos another opportunity but Toronto’s returner, Harry Abofs, attempted to catch the wet ball and he accidentally kicked it out of bounds when reaching down to pick it up. CFL rules state that when a ball is kicked out of bounds, possession goes to the other team so Calgary’s offence went back on the field and sealed the win.