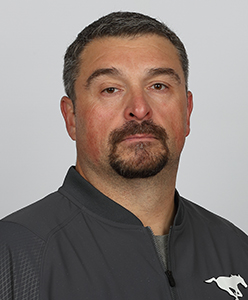 DelMonaco is in his sixth season as the Stampeders’ offensive line coach. Additionally, he oversees the club’s free-agent tryout camps during the off-season.

In 2018, the Calgary offensive line tied for the league lead in fewest sacks allowed with 27. In five years with DelMonaco as offensive line coach, the Stamps have never finished lower than second in that category. The line also helped running back tailback Don Jackson rank among the league leaders with 924 rushing yards and 5.8 yards per carry. Left tackle Derek Dennis earned West Division all-star honours.

In 2017, the Stamps allowed the second-fewest sacks in the CFL. The line also paved the way for tailback Jerome Messam to crack the 1,000-yard mark. Despite limited experience at the position, Ucambre Williams became the team’s starting centre and was Calgary’s nominee for the CFL’s Most Outstanding Offensive Lineman award.

In 2016, the Stamps allowed the fewest sacks in the CFL for a third consecutive season. Two members of the offensive line —Dennis and Spencer Wilson — were named CFL all-stars and Dennis was voted the league’s Most Outstanding Offensive Lineman.

In 2015, DelMonaco’s second season with the Stampeders, the club allowed the fewest sacks in the CFL for a second straight year and the offensive line paved the way for three different tailbacks to record 100-yard games. Pierre Lavertu and Wilson were West Division all-stars.

The Stampeders did not allow a single sack in the 102nd Grey Cup game as Calgary beat Hamilton to win the seventh title in franchise history.

DelMonaco joined the Blue Bombers in 2010 after a seven-year stint at Rensselaer Polytechnic Institute. He was RPI’s offensive line coach for two seasons (2003-04) and the offensive coordinator for five years (2005-09).

He previously had stops at Hudson Valley Community College and as a graduate assistant at the University of Illinois. DelMonaco played offensive line for four seasons at the University of Albany and was a captain during his senior season. The Great Danes won two conference championships during DelMonaco’s Albany career.

DelMonaco and his wife Kelly have two children — Julia and Pasquale III.