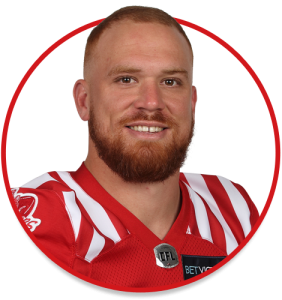 (Calgary) Grace was a West Division all-star after playing all 14 games and leading the CFL with a net punting average of 41.5 yards. His gross average on 78 punts was 45.6 yards, his longest punt was 63 yards and he had eight punts that pinned opponents inside their own 10-yard line. Grace also served as the holder for all-star kicker Rene Paredes. In the Western Semi-Final, he punted three times for a gross average of 44.7 yards and added one single.

Grace played three seasons (2017-19) at Arkansas State and in 37 career games with the Red Wolves, he punted 178 times for a 42.1-yard average. His longest punt travelled 75 yards and he also had 42 punts of at least 50 yards and 75 punts inside the opponent’s 20-yard line. In 2017, he became the first player in Arkansas State history to be a semifinalist for the Ray Guy Award as the nation’s top punter and was named first-team all-Sun Belt Conference in 2019.

Grace grew up playing Australian rules football at Warwick Senior High School and graduated from Arkansas State with a degree in exercise science.