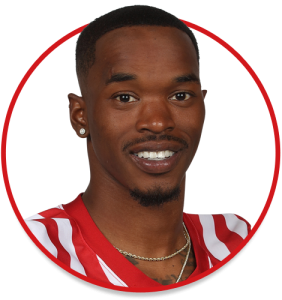 (Calgary) After starting the season on the practice roster, Henry played nine games including three starts. He had 11 receptions for 124 yards and two touchdowns as well as three carries for nine yards. He also returned 38 punts for 435 yards (an average of 11.4 yards per return), 21 kickoffs for 513 yards (24.4-yard average) and a missed field goal for 19 yards.

Henry played his senior season (2018) at West Georgia and led the Wolves with seven receiving touchdowns. He was second on the team in both catches (30) and receiving yards (407). Henry transferred to West Georgia after playing 29 games over three years (2015-17) at Georgia Southern. In his career with the Eagles, he made 23 catches for 344 yards and one touchdown. Henry also accumulated 382 yards on 18 kickoff returns.

Henry earned all-state honours and was named the school’s athlete of the year following his senior season at Tift County High School in Tifton, Ga. He also lettered in track and field at Tift County. Henry was an interdisciplinary studies major at West Georgia.