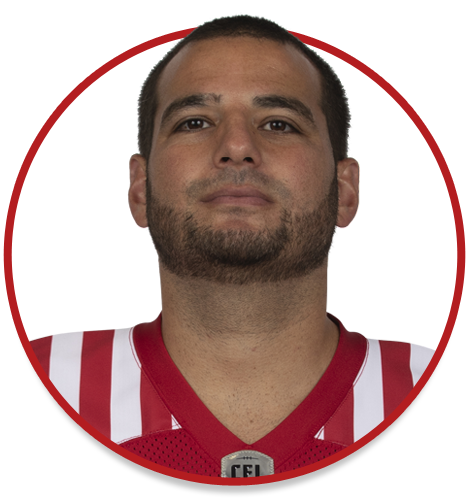 (Calgary) Paredes played all 14 regular-season games and accounted for a league-leading 155 points, going 44-for-48 on field-goal attempts (a CFL-best 91.7-per cent success rate) and 23-for-24 on extra points. He was a West Division and CFL all-star as well as the Stamps’ nominee and West Division finalist for the Most Outstanding Special Teams Player award. In Week 1 against Toronto, he became the 10th player in CFL history to kick 400 career field goals and in Week 3, he surpassed the 1,600-point milestone. In Week 6, he set a new career single-game high by kicking six field goals in a win at Edmonton. He matched that figure in Week 11 at BC and in the process earned the CFL’s top-performer-of-the-week award. In Week 10 at Saskatchewan, Paredes’ 44-yard field goal with no time left on the clock gave Calgary a 22-19 victory. He had another game-winning last-play field goal in a 13-12 win over Winnipeg in Week 16. Paredes averaged 60.8 yards on 54 kickoffs with a long of 81 yards. In the Western Semi-Final, he went five-for-eight on field-goal attempts and made both convert attempts.

(Calgary) Paredes was under contract with the Stampeders but the season was cancelled because of the global pandemic.

Paredes played in all 18 regular-season contests – including the 150th of his career – as well as the Western Semi-Final against Winnipeg. During the regular season, he was good on 43 of 52 field-goal attempts and 30 of 31 converts. Paredes had five field goals in Week 7 at Ottawa including the game-winner on the final play of the game. He had four other games with four field goals including four-for-four performances in Edmonton in Week 13 and at BC in Week 21. He was three-for-three including a season-best 50-yarder in Week 4 at Saskatchewan. Paredes also kicked off 80 times for an average of 64.4 yards. In the Western Semi-Final, he was successful on both of his extra-point attempts.

(Calgary) Paredes played all 18 regular-season games and achieved a 91.1-per cent success rate on field goals (41 for 45). That made him the first player in CFL history to have four different seasons with a field-goal success rate of at least 90 per cent. Paredes was four-for-four on field goals of at least 50 yards and he was second in the league with an average of 66.1 yards on kickoffs. Paredes booted 41 field goals, 36 converts and two singles for a total of 161 points. Paredes’ 43-yard field goal on the final play of the game lifted the Stamps to a 23-20 win over Edmonton in the Labour Day Classic. He played both post-season games and accounted for 12 points with two field goals and six converts while kicking off nine times for 573 yards. With two field goals in the championship-game win over Ottawa, he improved to a perfect 11-for-11 in his career during Grey Cup play.

(Calgary) Paredes played all 18 games and made 53 of 58 field goals (for a league-best 91.4-per cent success rate with a long of 48 yards) and 35 of 41 converts. He also had 78 kickoffs for 5,096 yards (for an average of 65.3 yards with a long of 95) and five singles. He kicked for a total of 199 points and also had three special-teams tackles. Paredes had four games with five field goals – against Montreal in Weeks 4 and 15, against BC in Week 9 and against Saskatchewan in Week 14. With three converts and two singles, he accounted for five points in the Western Final and averaged 70.4 yards on five kickoffs in that game. He was one-for-one on extra points, one-for-one on field goals and had five kickoffs for 258 yards in the Grey Cup. Paredes was a West Division and CFL all-star.

(Calgary) Paredes played 18 games and was 56-for-64 on field goals, 30-for-37 on converts and added five singles for a total of 203 points as he earned his team’s nomination for the CFL’s Most Outstanding Special Teams Player award. He had 81 kickoffs for 5,378 yards (a 66.4-yard average with a long of 95). Paredes had a streak of 32 straight successful field goal attempts and he kicked a 52-yard game-winning fielding on Sept. 24 against Winnipeg. Paredes was named a CFL player of the week when he accounted for 17 points in the Stamps’ Week 7 win against the Riders including a five-for-five performance on field goals and a pair of extra points. He was named a CFL player of the month for August when he was perfect on all 17 of his field-goal attempts including two games in which he went five-for-five. In the Western Final, he was two-for-two on field goals and four-for-four on converts. In the Grey Cup, he was two-for-two on field goals and three-for-four on converts.

(Calgary) Paredes played all 18 games and was 41-of-47 on field goals including 13 of 16 from 40 yards out or longer, with the longest coming from 51 yards. He also nailed three game-winning field goals including two – both against Hamilton – on the final play of the game. He had a mid-season streak of 21 consecutive field goals. Paredes had 70 kickoffs for 4,542 yards (a 64.9-yard average with a long of 95). He also had 26 converts, three singles on missed field goals and four singles on kickoffs. His 152 points and 41 field goals led the West Division. Paredes played in the Western Semi-Final and was one-for-one on field goals and two-for-two on converts. In the Western Final, he was five-for-five on field goals. He was the West Division nominee for Most Outstanding Special Teams Player and was named a division and league all-star.

(Calgary) Paredes was the CFL’s Most Outstanding Special Teams Player and earned West Division and league all-star honours as he played all 18 games and went 54-of-57 on field goals and 49-for-50 on converts. Paredes added two singles for a total of 213 points and had 81 kickoffs for 5,147 yards (a 63.5-yard average with a long of 80). On July 29, he set a new CFL record for most consecutive field goals, passing Paul McCallum’s record of 30. Paredes extended his streak to 39 before it was snapped on Aug. 23 in Toronto. On Oct. 26, he became the third Stamps player to reach 200 points in a season. Paredes was named CFL special teams player of the week when he went five-for-five on field goals and added a convert to account for 16 of the Stamps’ 22 points in a Week 3 victory over the Alouettes. The next week, he was named top special teams player again when he went four-for-four on field goals and added two converts for a total of 14 points in the Stamps’ 38-17 victory over Montreal. Paredes set a new CFL record for field goal efficiency when he finished the season at 94.7 per cent. He was the CFL’s special teams player of the month for June/July, September and October. Paredes also played in the Western Final and was two-for-two on field goals and had one kickoff for 67 yards.

(Calgary) Paredes playe 18 regular-season games and earned West Division and CFL all-star honours as he converted 93.0 per cent of his field-goal attempts to set a new franchise record and establish the second-best single-season success rate in CFL history. He was good on 40 of his 43 field-goal tries including his final 18 in a row. Paredes was named the CFL’s special teams player of the month after going a perfect 14-for-14 on field goals in five games during October and November including a game-winner on the final play Nov. 2 in Edmonton. Paredes was 49-for-49 on extra-point conversions and finished third in the CFL with 170 total points. He was also among the league leaders with a 63.2-yard average on kickoffs. Paredes was the Stamps’ nominee for Most Outstanding Special Teams Player. In the playoffs, Paredes accounted for 32 points as he was a perfect on eight field-goal attempts and seven extra-point conversions. He was four-for-four in field goals in the Grey Cup game.

(Calgary) Paredes joined the Stamps for Week 2 after an injury sidelined Rob Maver. The rookie made a strong early impression, kicking a 50-yard field goal in his first CFL attempt on July 8 at BC and being named the CFL’s top special teams player of the week. He went on to make 35 of 45 field goal attempts and finished fifth in the CFL with 158 kicking points. He was perfect on 48 extra-point conversions. Paredes twice kicked five field goals in a game including an Oct. 14 contest against Toronto in which he was perfect on each attempt. He also kicked five field goals on Sept. 9 in Edmonton. He also averaged 60.1 yards on 88 kickoffs. Paredes accounted for at least 10 points in a game on seven occasions including a season-high 17 points on Sept. 9 against Edmonton and again on Oct. 14 against Toronto. He was three-for-three on field goals and accounted for 10 points in the West Division semifinal against Edmonton.

Clutch performer: Has nine career game-winning field goals on the final play of the game

Honoured: CFL’s Most Outstanding Special Teams Player of the Year in 2013

Making history: First player in CFL history to have four different seasons with field-goal success rate of at least 90 per cent. He now has five such seasons

Paredes was born in Venezuela but grew up in Pierrefonds, Que. He attended CEGEP at John Abbott College and went to Felix Varela Senior High in Miami, Fla. During his senior year in high school, Paredes was first-team all-Dade County and first-team all-state.