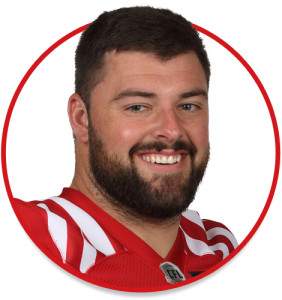 McEwen was selected in the first round (third overall) by the Toronto Argonauts in the 2015 draft. He signed with the Argos on May 13, 2016. McEwen attended mini-camp with the National Football League’s New York Giants in 2015.

(Calgary) In his first season with his hometown team, McEwen played all 14 regular-season games and made 14 starts at centre. He also started the Western Semi-Final. McEwen was the Stamps’ nominee for Most Outstanding Offensive Lineman and was voted a West Division all-star. McEwen led an offensive line that allowed the second-fewest sacks in the league and blocked for tailback Ka’Deem Carey, who led all running backs with seven rushing touchdowns and was second in the league in both rushing yards and yards from scrimmage.  McEwen served as one of the team captains.

(Calgary) McEwen was under contract with the Stampeders but the season was cancelled because of the global pandemic.

(Toronto) For a fourth consecutive season, McEwen played all 18 regular-season games and, for a third consecutive year, he was the Argos’ nominee for the CFL’s Most Outstanding Offensive Lineman award.

(Toronto) McEwen started all 18 regular-season contests and earned East Division and CFL all-star recognition. He was Toronto’s nominee for both the Most Outstanding Canadian and Most Outstanding Offensive Lineman awards and the East Division finalist for the top offensive lineman honours. McEwen started both the East Final and the Grey Cup as he helped the Argos capture the championship.

(Toronto) McEwen appeared in all 18 regular-season games for the Argos and made 13 starts. He was Toronto’s nominee for the Most Outstanding Rookie award.

Honoured: Argos’ nominee for Most Outstanding Rookie in 2016

Honoured: Argos’ nominee for Most Outstanding Canadian in 2017 and 2018

Honoured: Stamps’ nominee for Most Outstanding Offensive Lineman in 2021

McEwen played 40 games over five seasons (2011-15) at the University of Calgary. He was part of three Hardy Cup championship teams as a member of the Dinos and was named a Canada West all-star on four occasions. McEwen was a first-team all-Canadian in 2014 and 2015 and a second-team all-Canadian in 2013. In 2011, he was the Dinos’ nominee for rookie of the year. McEwen was one of three Canadians invited to take part in the 2016 East-West Shrine Game in St. Petersburg, Fla.

McEwen is an alumnus of Calgary’s Notre Dame High School. He played as a lineman on both sides of the ball for the Pride, earning league all-star recognition on two occasions. McEwen also played basketball and competed in track and field at Notre Dame.