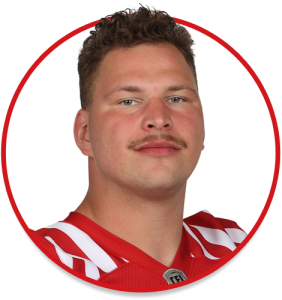 (Calgary) Williams played all 14 regular-season games for the Stampeders including 13 starts at left guard. He was part of a unit that allowed the second-fewest sacks in the league and blocked for tailback Ka’Deem Carey, who led all running backs with seven rushing touchdowns and was second in the league in both rushing yards and yards from scrimmage. Williams also started the Western Semi-Final at left guard.

(Calgary) Williams appeared in two games as a reserve offensive lineman during his rookie season with the Stampeders, making his CFL debut in Week 17 at Montreal.

Williams played four seasons (2015-18) at Manitoba. He was a Canada West all-star in 2018 as he helped the Bisons accumulate 1,345 rushing yards – just 21 yards shy of the conference lead – and an average of 467.3 yards of total offence per game. He enrolled at Manitoba after a stint with the Winnipeg Rifles juniors.

Williams began playing football in Grade 10 at Murdoch MacKay Collegiate in Winnipeg. He was named to Team Manitoba’s Football Canada Cup squad in both 2013 and 2014 and was selected to Team Canada in 2014. He spent his Grade 12 season playing for the CJFL’s Winnipeg Rifles.