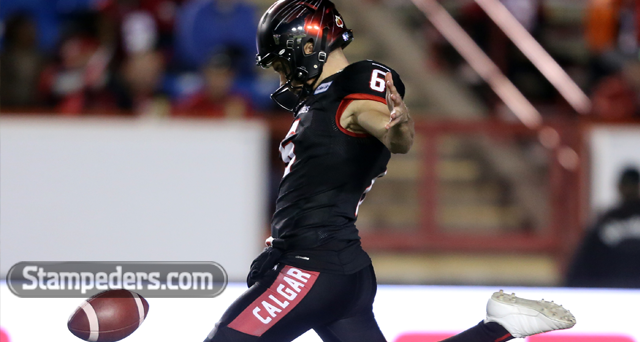 It can sometimes be an overlooked position in football and a thankless job, but somebody has to do it.

Fortunately for the Calgary Stampeders, they have one of the best in Rob Maver, who excels at putting footballs deep and forcing opponent’s returners to earn their yardage.

Coming into Sunday’s Western Semi-Final action against the BC Lions, much was made regarding the Leos’ explosive return man, Chris Rainey.

Thanks to Maver’s superb punting and excellent coverage by the Stamps special teams players, Rainey was kept from being much of a factor.

“When guys are tackling and covering like they were tonight, it doesn’t matter too much where I put the ball, they’re going to make that play,” says Maver following the Stampeders’ dominant 35-9 handling of BC.

The previous time the Lions visited McMahon Stadium, Rainey was able to manufacture a couple returns for touchdowns – one off a punt another on a kickoff – to give BC a chance to win.

This time around, Maver and friends were going to be sure that night remained a distant memory.

“Every returner is good in this league,” says Maver.  “Especially when someone runs back two on you, you can’t afford to make those same mistakes. (Sunday) was just a matter of working more on our coverage principles, me putting the ball where it needs to be and guys just finishing and making the play.”

For his part, Maver was dominant in his craft, using the wind at times to his advantage, often pinning the Lions deep in their zone to begin a drive.

On five punts, the 2014 West Division all-star averaged a staggering 57.2 yards with his longest being a 77-yard single in the first quarter.

While you may not see many SportsCentre highlights of punting, it’s no less a critical part of the game, limiting one’s opponents effectiveness by giving them a long field to drive.

The pressure of ensuring his teammates on defence have a good field position to work with doesn’t faze Maver as he has complete trust in his coach and fellow specialists to contain the opposition.

“I don’t think too much about failure, just doing what I have to do and the process to get the result,” he says. “(The Western Final) is going to be a hard-fought game. We’re going to have to bring it on special teams again.

“Special teams deals in momentum plays. If we can do our job to limit their momentum, we know the other two sides of the ball are going to do what they have to do.

“It’s the playoffs. You either show up or you go home.”

If Maver and his fellow specialists can repeat their strong performance from the Western Semi-Final, it may be a couple weeks before they can go home.