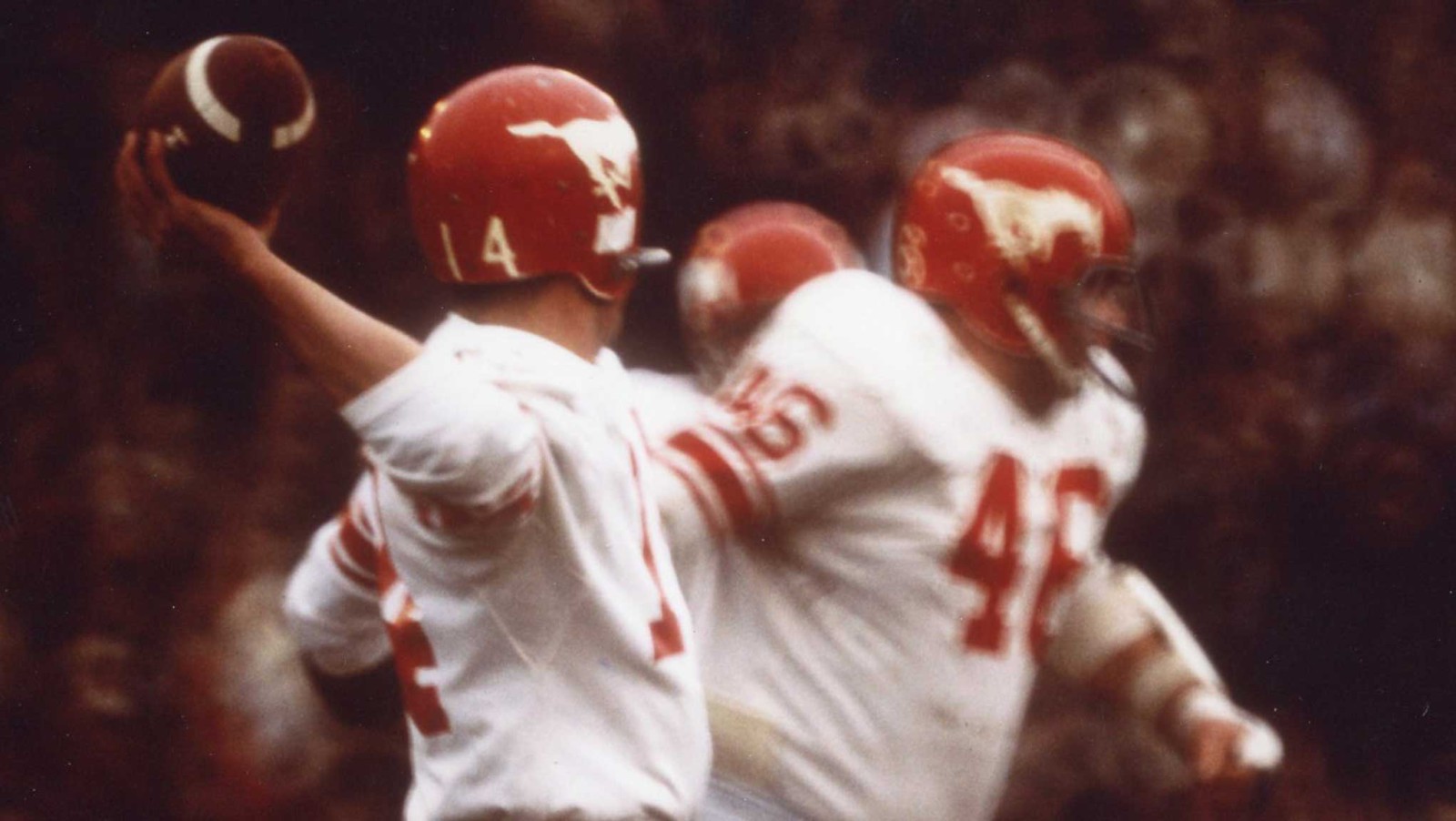 At the beginning, the Red and White were actually yellow and bluish-purple.

What’s red and white and gold and silver and black and blue and yellow?

The answer is the Calgary Stampeders’ uniforms over the decades.

Traditionalists may cry out in anguish over any modification made to their favourite team’s outfits but the truth of the matter is the Stamps have sported a wide array of fashions over the years.

The 1948 champs and their candy-striped shoulders.

For starters, did you know the Red and White didn’t actually start out red and white?

That’s right, for the first two full seasons of the Stamps’ existence — 1946 and 1947 — the team wore a yellow and bluish-purple jersey.

One of the most unique looks in Canadian football history was worn by the 1948 Stamps, the first Grey Cup winner in franchise history. The only unbeaten team in league history was part of a Stamps fashion era that featured long-sleeved red jerseys with red-and-white striped shoulder yokes.

The story goes that the team just happened to find a lot of that particular style of jersey and, just like that — with no marketing research, market analysis or focus groups — a timeless colour scheme was established.

The 1948 champs’ heads, by the way, were covered with white leather helmets with red stripes radiating from the crown.

By 1953, the candy-striped yokes had been abandoned for three simple stripes at the base of the sleeve. That look lasted just one year as the Stamps then adopted so-called UCLA stripes, with the striping separating the shoulder from the top of the sleeve.

It wasn’t until the early 1960s that the helmet first sported an emblem, namely a white horseshoe. After a couple of seasons, the horseshoe was removed and replaced with the players’ numbers.

Another major change at this time was the introduction of gold pants in 1962.

The 1960s featured gold pants and player numbers on the helmets.

The next major change came in the latter stages of the 1960s as the now-iconic white horse made its debut on the Stampeders’ helmets.

The biggest change in the 1970s was the addition of silver as an accent colour. Silver appeared in striping on the sleeves, socks and helmets and the Stamps added silver pants to the wardrobe.

There were relatively insignificant jersey modifications along the way but the next major change happened in 1989 when silver was dropped, the sleeve striping disappeared and a black outline was added to the numbers.

In 1994, a white stripe was added to the base of the sleeves and the collar.

That same season, the Stamps made history by becoming the first CFL to introduce a permanent third jersey when they unveiled black tops for the Labour Day Classic. They commemorated the occasion with a 48-15 win over the Eskimos.

The Stamps have made black jerseys a part of the Labour Day tradition.

Calgary played its first black-jersey playoff game in the 1998 West Division final and defeated Edmonton. A week later, while again sporting black, the Stamps beat Hamilton 26-24 in the Grey Cup.

The mystique of the third top continued a year later. The Stamps warmed up for a regular-season game against the BC Lions in their traditional red tops, but when they were introduced, players ran out of the locker-room wearing a re-designed black jersey. The Stamps went on to defeat the BC Lions.

In 2003, the Stampeders introduced a new logo that appeared on road jerseys — a rearing, snorting white horse framed by a black horseshoe.

In 2005, as part a league-wide re-design, thin white curved piping was added to upper-shoulder-and-chest area of the Stamps’ red jerseys, creating what was described by some as a bib look. The effect was even more noticeable on the road as the shoulders and upper chest were red, the rest of the jersey white with thin black separating the two portions.

The 2010 Stamps wore throwbacks to the team’s silver-lined era.

That design was replaced in the 2012 season as the curved piping was removed.

In 2011, the Stampeders introduced a black helmet for use in road games while maintaining the traditional red lids for dates at McMahon.

In 2014, a new chapter in the Stamps’ tradition of wearing black on Labour Day was written as the Outlaw jerseys debuted.

New additions include a Western-inspired number font and the Latin slogan Quidquid Requiritur — Whatever It Takes — on the inside of the collar. The iconic white horse appears on the back of the jersey above the namebar.

As of 2016, the font from the Outlaw jerseys will now also appear on the home reds and the road whites.

So that’s an abbreviated look at the Stamps’ uniform history. But wait, some of you memorabilia collectors may be asking, what about the days that the Stamps wore green jerseys?

And yet, those who knew football only from late 1950s and early 1960s football cards could be forgiven for believing the Stamps wore the colour of two of their hated rivals.

Explanations vary but somehow, black-and-white photos of Stampeders players were colourized green by the well-meaning but ill-informed people at Topps. One theory is that the manufacturer mistakenly made a switcheroo and put the Stamps in green and the Roughriders in red.

Another theory is that the graphic artists of the day had no idea what colours the jerseys should be and arbitrarily picked a hue. Whatever the truth, the effect is jarring.

It wasn’t until 1966 that the card companies came to their senses and rendered teams in their proper colours. And for that, we are all very grateful.

Despite what you see in Topps cards, the Stamps never wore green.