Dinos DB ecstatic to get call from Stamps

Dinos DB ecstatic to get call from Stamps

Should anyone this far into proceedings still require a reminder, Marcello Rapini directs them to film of Nov. 12, 2016, and the University of Calgary Dinos’ 46-43 Hardy Cup slapdown of the UBC Thunderbirds at McMahon Stadium.

“He made a huge interception in that game,’’ the longtime Dinos’ DB coach is recalling. “I think we were up 10 points and they were driving the ball.

“I remember they threw to his side, he picked the ball off and pretty near returned it for a touchdown (58 yards).

“And I could hear (UBC coach Blake) Nill, he was mad, screaming on the far sideline: ‘Why are we throwing on Laurensse’s side?!’”

One for which there is no plausible answer. 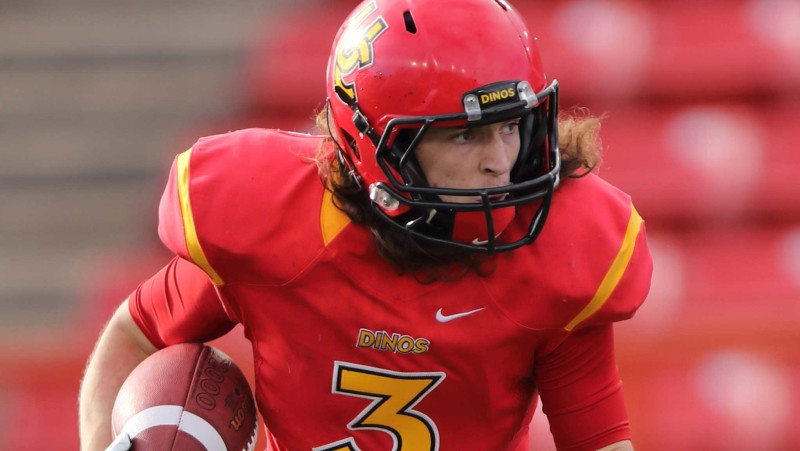 Photo courtesy of U of Calgary Dinos

The U of C, of course, turns out CFL prospects at the rate of, say, Switzerland producing chocolates, Italy dispensing world-class tenors or McDonald’s Big Macs.

A record nine Dinos were selected through Sunday’s draft, including, seventh round at No. 61, defensive back Adam Laurensse, by the Calgary Stampeders.

“Just ecstatic,’’ says Laurensse, from home in Sherwood Park, up Edmonton’s way. “A dream come true, really. To be able to stay in Calgary, not have to move, maybe out east.

“A lot less to worry about. I get to stay with the Stamps.

The 6-1, 185-pounder is a four-year all-Canada West selection and three-time all-Canadian.

“I was very pleased when his name was called,’’ says Rapini. “To be honest, I think” – draft-wise – “he got the short end of the stick in a lot of ways. You talk to any coach in the CIS West about how good Adam Laurensse is. He was getting frustrated last year because he wasn’t getting a lot of balls thrown his way.

“You ask the coaches on the other teams and they’ll tell you, to a man: ‘We’re just not throwing at him.’

“His ability far exceeds some of his test numbers.

“He isn’t a track star, he’s a football player.

“Adam is as smart a football player as you’ll find. He puts in the work not only in the field but the film room.

“He understands situational football, knows tendencies very well to due to all the study work I mentioned.

“He and (Robert) Woodson. I’ve coached a lot of years at U of C and I can safely say I’ve never coached anyone with a higher compete level.” 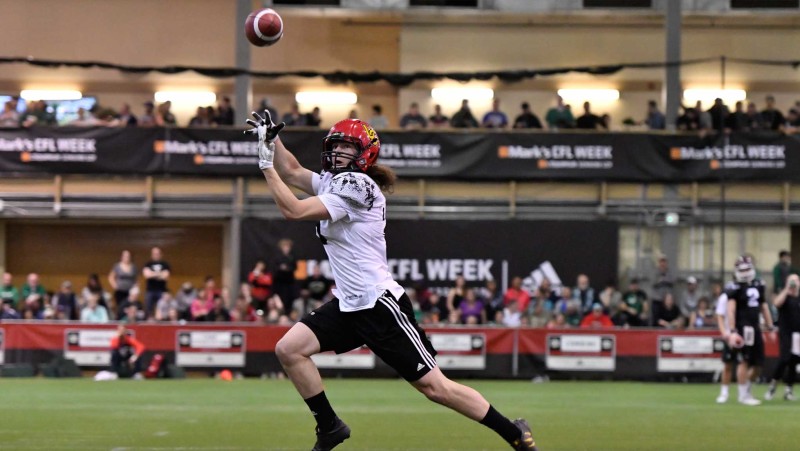 Laurensse at the 2017 CFL Combine (Photo by Arthur Ward)

Laurensse not only welcomes the opportunity to slap the ’cuffs on the most dangerous game-breakers, he’s quite insistent on it.

Some players are simply wired that way.

“You don’t learn anything, you’re not going to get any better, going against just anybody,’’ he reasons.

“You always want to keep the competition up, right?

“Saying that, though, you’ve gotta know you’re always going to get knocked down a few times before you start getting better.”

Rapini vividly remembers one of those knockdowns. The Dinos were playing Saskatchewan and a receiver ran an up-and-out against No. 3.

Laurensse bit, and the Huskies slotback scooted by him to haul in a 50-yard touchdown pass.

“Sometimes you get DBs who act all cocky, go up against the top receivers on, say, UBC or Saskatchewan, get lit up a couple times and – guess what? – they come to the bench saying: ‘Uh, coach, maybe we could play a few more zones …’

“But Adam’s just been beaten for this touchdown by this guy and he’s begging me to put him in a man-position again.

“The competitiveness I was talking about.” 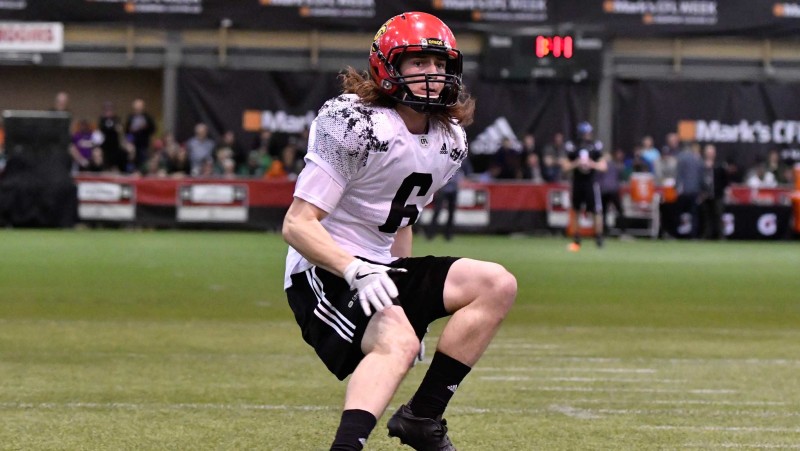 Laurensse at the 2017 CFL Combine (Photo by Arthur Ward)

That innate ‘bring it on!’ mentality, the embracing responsibility, the fearlessness to go head-to-head against the best and the willingness to of being able to process difficult moments and turn them to advantage.

Put those all together, and …

“I know what I want to do,’’ says Laurensse, matter-of-factly,  no false bravado. “I have aspirations, things I want to achieve.

“I want to compete and play in the CFL. I want to play DB and I want to help the Stamps.

“I know how hard I’ll work, how much I want it.

“So we’ll see how far that can take me.”