Family and food. Food and family.

These two elements have forever been exquisitely embroidered in the fabric of Italian culture.

From casual get-togethers to large holiday banquets, food invariably plays a prominent role at Italian family gatherings. And we’re talking about copious amounts of food here. With the mountains of delectable options and the constant pleas – or are they commands? – of “Mangia, mangia,” it’s virtually impossible to walk away hungry from an Italian feast.

In Italian culture, you don’t eat just for eating’s sake. From the friendly arguments over cappuccinos and biscotti to the traditional five- (or more) course wedding meal to the constant, lively chatter at the mini-marathon that is Sunday dinner, meals are boisterous and joyful occasions. In short, a time to be a family. 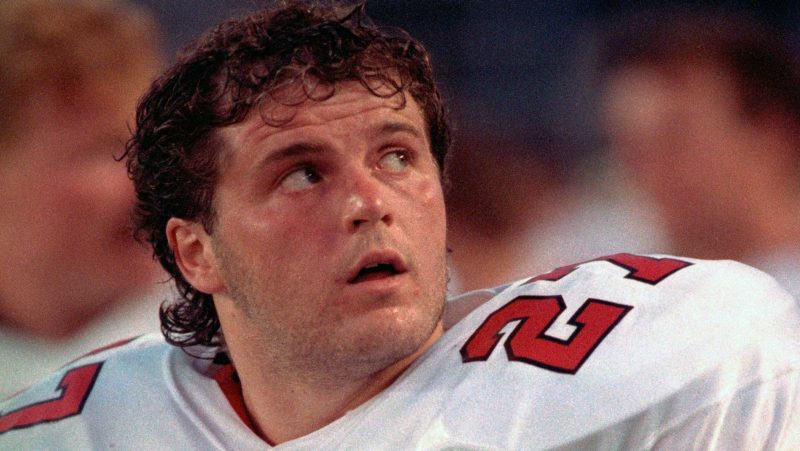 Tony Spoletini during the 1991 season (Photo by Scott Grant)

With this unbreakable connection between Italian food and Italian families, it’s little wonder then that Tony Spoletini, Tom Spoletini and Mike Palumbo got into the sausage-making business in the early 1990s, a venture that eventually grew into Spolumbo’s Fine Foods & Deli.

In a nifty story that combines elements of the New World and Old World, these three born-and-bred Calgarians went from Canadian Football League careers with the hometown Stampeders to a food business built on a foundation of traditional Italian recipes.

And, because we’re talking food here, family plays an integral role in every step of the story.

Tony and Tom are cousins, but say the relationship is more than that.

“I grew up with my cousin Tony,” says Tom. “I call him cousin, but we’re more like brothers. We grew up right next door to each other and we’ve worked together for a long, long time and played together forever.”

Mike isn’t related by blood, but Tony’s mother Aurora refers to him as “my nephew Michael.” 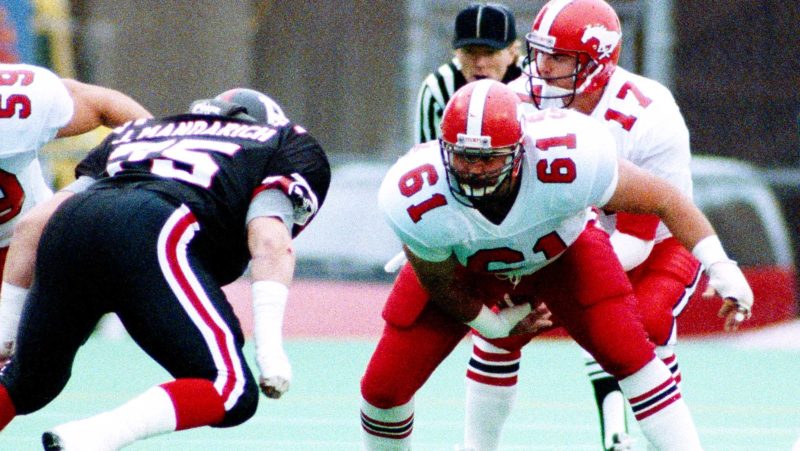 Tom Spoletini during the 1990 season (Photo by Scott Grant)

The business got started in the basement of a restaurant operated by Tom’s in-laws, the Tudas, who also provided the bulk of the recipes.

“Anything that we’ve ever started,” notes Tom, “our family has always been very, very supportive. When football ended, I remember my mom said, ‘One door closes and another one opens.’ The food business was the door that opened for us. We took space downstairs in my father-in-law’s restaurant in the prep kitchen and started Spolumbo’s down there.”

The first Inglewood location was a 10-seat deli with the sausage-making facilities located in the backroom.

“I’d work the stuffer and put the casings on,” says Tony, “Mike would tie and Tom would package. So it was pretty fun.”

Out front, the tiny seating area would quickly fill up.

“Sometimes we had to put a tablecloth over a plastic tub to create a makeshift table between the bathroom and the kitchen,” quips Tony.

“It was fun. People loved that feel and that you could improvise. It was fun in those days. By Year 3, we had a pretty good reputation and that little place used to fill up. We knew that we could either stay the way we were or take a chance and get bigger because we started to bust at the seams.”

In August of 1998, the move was made to their current Inglewood location, which has room to seat 100.

As far as the partners are concerned, Spolumbo’s is a uniquely Calgary success story.

“I think we would have been hard-pressed to have this success in other cities,” suggests Tony. “I’m glad we’re Calgarians and I’m glad we did it in Calgary.”

“I truly believe Calgary is the cradle of entrepreneurship,” remarks Tom. “I believe that everybody who starts a business here and has an idea has more than just a fighting chance.”

The partners are overwhelmed by the support they’ve received from Calgarians over the years, and they received another reminder of the city’s community spirit when the 2013 flooding temporarily forced the closure of Spolumbo’s.

“We had, while we were down, probably 200 calls and emails from friends and customers wanting to come down and help clean up,” says Tony. “It just shows the love and support in this city.” 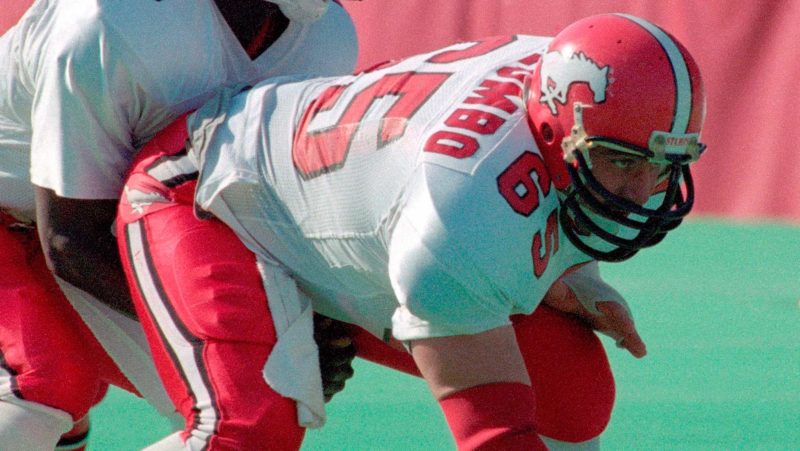 Mike Palumbo during the 1989 season (Photo by Scott Grant)

The Spoletinis and Palumbo have made a point of returning the generosity they’ve been shown. They’ve been high-profile supporters of many worthwhile causes, most notably amateur sports and football in particular, but most of their civic-minded work has been done without fanfare.

The business offers a fundraising program for schools, teams or other groups through the sale of sausages. Spolumbo’s routinely hosts amateur sports press conferences and they’ll take their show on the road to serve up food at sporting events and outdoor celebrations, with one of the partners often showing up to grill the sausages himself.

These guys were born to do this.

“We’ve been making sausage since we were six years old,” says Tom. “Making sausage was a passion that we learned as we were growing up.

“I’ve always said that playing with the Stampeders, you don’t make a whole lot of money but as Canadian kid, you love the game and it opens a lot of doors. When we first started going out flaunting our product, it opened the door and then the product spoke for itself.”

Food and family, with another “F” – football – in between.

“We got to live the best of both worlds,” says Tony. “We got to be Canadian but still experience that old world Italian culture. That’s really shaped me to be the man that I am.

“A lot of the reason that we’ve had the success that we’ve had and done the things we’ve been able to do is because of that support from our family. We couldn’t be happier. We have no regrets — We’ve had a great, great life.”

Tony Spoletini, Tom Spoletini and Mike Palumbo will be in the Fan Zone signing autographs from 11 a.m. to noon before today’s Labour Day Classic!