It was great to come out here with my team and get a win on Labour Day. I know it’s a big game for the organization and the CFL, in general. I feel great about our team stepping up in all three phases of the game – offence, defence and special teams – and I’m just proud of my team.

We played great on special teams, with Roy’s touchdown. We played dominant offence and on defence, we were very opportunistic.

Today I was just trying to be optimistic, trying to make plays whenever they come my way. A couple came my way today, so I’m grateful for those.

The first interception wasn’t even my man. I was covering somebody else and then somebody took my man and I rolled under the coverage to get the ball. Playing as a team, feeding off of each other and knowing your assignments puts you in position to make plays.

I was for sure thinking six, but Mike Reilly was rolling. I got to give him credit, he was moving pretty fast to stop that from being a touchdown. I was thinking about a cut back, but he had a lot of angles taken away from me.

On the second one, I think Reilly was trying to throw it away from one of our other defensive backs and that coincidentally threw it more towards me. That was a nice steal.

You cant make plays without being targeted, so I’m glad that I was around the ball enough to make some plays. I hope quarterbacks don’t stop throwing my way, but I can make plays wherever the team needs me, whether it’s in the pass game, run game, blitzing the quarterback, I’ll be everywhere.

We’ve been playing really consistent in playing together as a unit, as far as the pass rush and the pass game combined. We’re making sure tackles and not giving up big plays. We’ve got to continue to do that and not allow them to get too deep in our territory.

Defence is playing great, we’ve got to finish stronger. We played great in the early quarters and we want to keep the momentum going of keeping other teams out of the end zone. 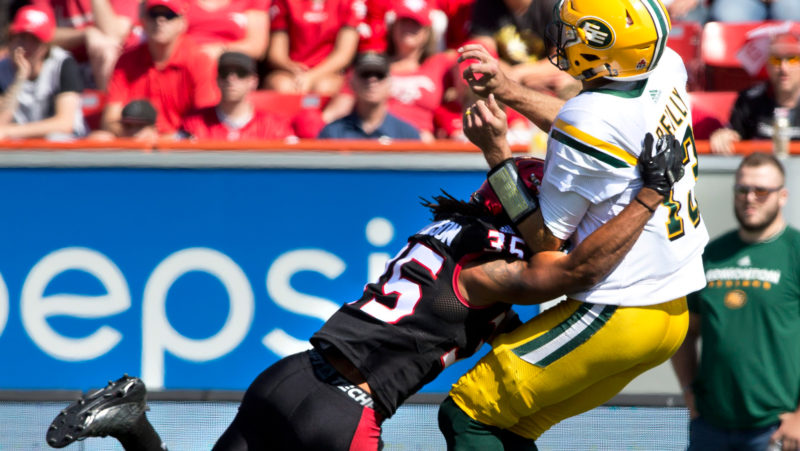