Linebacker Scott Coe during the 2007 season

In the literal sense of the term, Scott Coe was one of most colourful characters in Stampeders history.

During his time in Calgary, one of the ongoing challenges was guessing what hue of the rainbow the linebacker would dye his hair on any given day.

The human paint swatch also brought the gift of gab and an upbeat personality to the Stampeders locker room during his four seasons – 2004-07 – at McMahon Stadium.

And, oh yeah, he could also play the game. 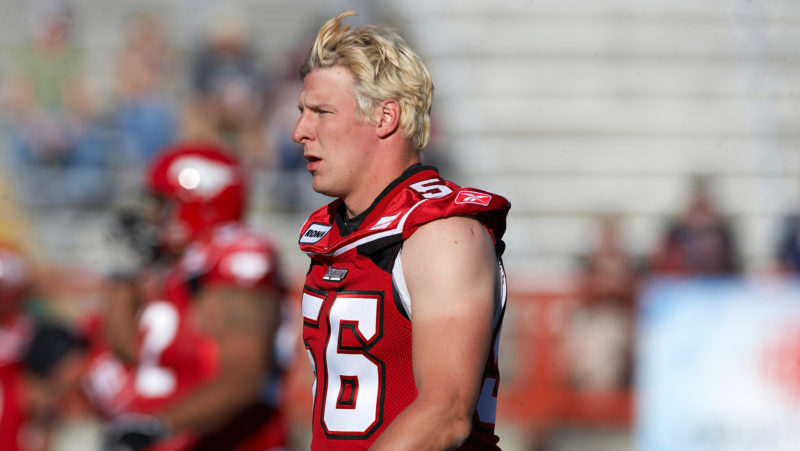 Coe was the lone Canadian on a dynamic Stamps linebacking crew – along with George White, John Grace and Brian Clark – that was created in 2004 as part of Calgary’s 3-4 defence.

The unit was easily the highlight of what was otherwise a difficult 4-14 season for the Stamps, with Coe contributing 71 tackles, two forced fumbles, four fumble recoveries, four sacks and two interceptions.

Coe remained a solid contributor throughout his Stamps career and by the time he was done, he had played 69 games for the Red and White and recorded 256 tackles, nine sacks, three interceptions, 10 forced fumbles and eight fumble recoveries.

The Winnipeg native started his career with two seasons and Hamilton and wrapped things up with one year in Edmonton but when he retired, he returned to Calgary and has been here ever since. He currently works as an associate with Hamilton and Partners.

Scott Coe will be in the Fan Zone signing autographs from 5:30 to 6:30 p.m. before tonight’s game!