Ladies, it’s time to take the next step. You’ve been following this blog, you’ve learned a lot about football and the Stampeders, now is the time to actually gear up and try the game.

For the last three weekends I’ve covered flag football events. They’re everywhere and it’s great to see people getting out and playing the game. But if you’re looking for something a little more dramatic, a little more intense and a little more structured, well let me introduce you to The Rage.

The Calgary Rage is a women’s amateur tackle football team, one of eight within the Western Women’s Canadian Football League. The Rage went undefeated last season, only to lose in the championship game to the Regina Riot.

If you happened to be at the last Stampeders home game Friday night, you would have seen the Rage participate in the half-time show. 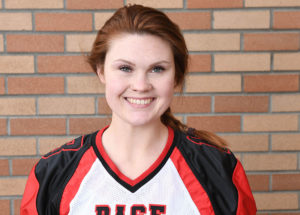 So how does one become a member of a women’s tackle football team you ask? I had the chance to sit down with Rage linebacker and last year’s WWCFL Western Conference MVP Courtney Dawson to get her thoughts on why you should consider joining the league.

Alanna: Why did you decide to try women’s tackle football?

Courtney: My now fiancé played for the (Calgary) Gators and also did a season with the Stamps and he got asked to coach and he figured that it was time for me to try another sport so I chose football.

C: It’s a bunch of women that all just want to get out and it’s rough and tumble and you get dirty and it’s kind of awesome! Everyone has kids and you go back to your regular life and then you come out and put on football pads. It’s just cool.

A: From what I’ve seen, the competition is pretty stiff. How would you describe it?

C: It is quote-unquote recreation, but if you ask me if you put on equipment to hit another human being it’s not really recreational. Everyone knows if you’re not willing to take the hit and give the hit then you’ll sit on the bench and someone is willing to do it so it’s good that way. Everyone knows our strengths and our weaknesses and the girls are willing to hit like me, I’m the savage, I go until I can’t go any more so it’s awesome to be around girls who have the same mindset.

A: You have a team meeting coming up that open to the public, what would you say to someone to get them to consider trying out for the Rage?

C: I would say it may seem scary and it may seem a little weird but once you get to meet the girls  and the atmosphere that it brings, it’s just really family oriented and it’s really fun to just gear up and hit another person and it just feels cool. It’s hard to describe but when you’re with a bunch of women who all have the same mindset that not just guys get to do it but we get to do it, too. We want to get those girls who want to play football in high school but can’t because they’re all boys teams or are uncomfortable and to get that out on our team and start them young. I wish I started when I was younger.

The Rage team meeting goes down on Nov. 6 at 7 p.m. at the Rosscarrock Community Hall. You can visit the website – calgaryrage.com – for more information and to see what all “the rage” is about.