The Stampeders are back in the Grey Cup.

For the third straight year, the Red & White will take part in the CFL championship game after a 22-14 win over the Winnipeg Blue Bombers in the Western Final Sunday at McMahon Stadium.

Bo Levi Mitchell tossed three touchdowns to Eric Rogers and the team’s defence, led by Ja’Gared Davis, had another massive game, holding the Bombers to just 219 total yards of offence in the win.

They also managed to shut down Most Outstanding Canadian nominee Andrew Harris, limiting the all-purpose back to 71 yards on 13 carries, meager by his usual standard. 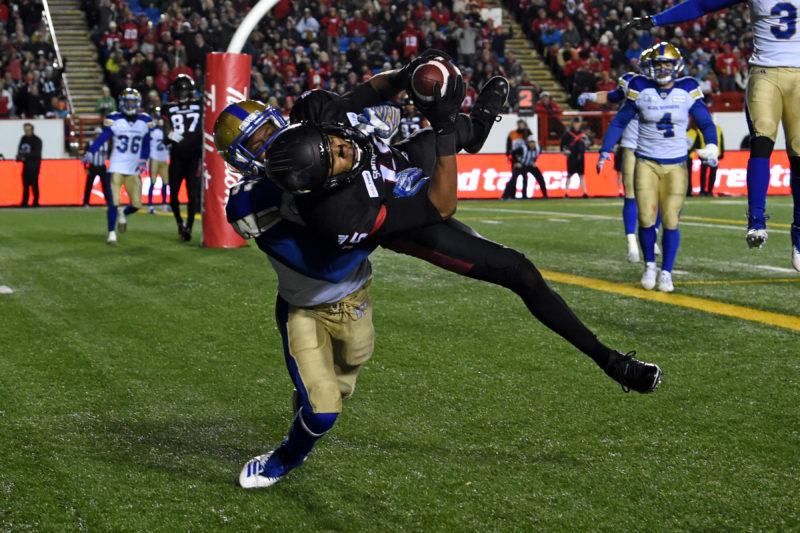 “We honestly didn’t script for E to have those plays in the endzone,” said Mitchell. “We had other plays going but their coverage is always going to dictate where I throw the ball. I’ll always let the defence tell me where to throw.

“Unfortunately they were in man a lot and Eric is a hard guy to cover, and he just takes advantage of the plays that are there. I trust Eric, I understand his body language and know where he’s going to be on certain things and that makes it easy to trust down there in the green zone, which you always want.”

Davis sacked Bombers quarterback Matt Nichols twice in the second half, as Calgary’s defence snuffed out the Winnipeg offence every time it started to heat up in the final 30 minutes.

“I think those guys, man, when you put them to the test they are always going to come back fighting,” said Mitchell. “They had a helluva night tonight. I mean, (they) stopped a very, very good team.”

Next up will be a Nov. 25 date in Edmonton with the Ottawa RedBlacks, who beat the Hamilton Tiger-Cats 46-27 in the Eastern Final in the Nation’s Capital earlier Sunday.

On a chilly day at McMahon that started with rain, the Bombers were first to put up some points.

On their second possession of the game, they couldn’t get a first down but instead of punting, let Justin Medlock try a long field-goal and he nailed it with a playoff record 57-yard boot to open the scoring.

Rene Parades had a chance to knot the game at three the next time the Stamps got the ball with a 45-yard boot but missed wide left.

After a lengthy 11-play Bombers drive late in the opening quarter, the Winnipeg march was halted leading to another Medlock field-goal, this time a 37-yarder.

Romar Morris looked to get the Stamps on the board with a catch-and-run to the endzone in the second quarter but Chris Matthews was called for offensive pass interference.

Stamps coach Dave Dickenson challenged the call but after review, it was upheld.

The Red & White continued to push down the field after, with Mitchell just missing Markeith Ambles in the endzone but a few plays later he hooked up with Rogers on a 12-yard strike for the lead, capping a 15-play, 92-yard drive.

On their next possession with great field position after a short Winnipeg punt, Matthews turned a quick pass into a 22-yard gain as he danced down the sideline, leading to an eight-year strike to Rogers to make it 14-6.

With less than a minute left to play, Tunde Adeleke ran a punt back 71 yards to the endzone but the flags flew again with a holding call on the Stamps to nullify what would have been their third major of the quarter.

The Bombers managed to pin the Stamps on their two-yard line early in the third quarter when Mitchell avoided a sack by handing off to O-lineman Brad Erdos, who was immediately tackled for a 10-yard loss. Punter Rob Maver conceded a safety on the next play, making the score 14-8.

Medlock booted a 41-yard field-goal with 3:33 to play in the quarter to inch the Bombers closer, trailing by just three.

With seven minutes left in the game, the Stamps got their offence going again, driving down the field.

An 18-yard scamper from Don Jackson and a 15-yard catch from Lemar Durant were part of a seven-play drive that went 74 yards and ended with Rogers catching his third TD of the day on a 10-yard pass from Mitchell.

Prior to the drive that essentially sealed the win, Mitchell had gathered a frustrated offence together for a pep talk.

“I just brought the offence over and did the same thing any other quarterback would do,” he said “I just told them, hey man, you have an opportunity right now to drive down and score a touchdown and be the reason we go to a Grey Cup. 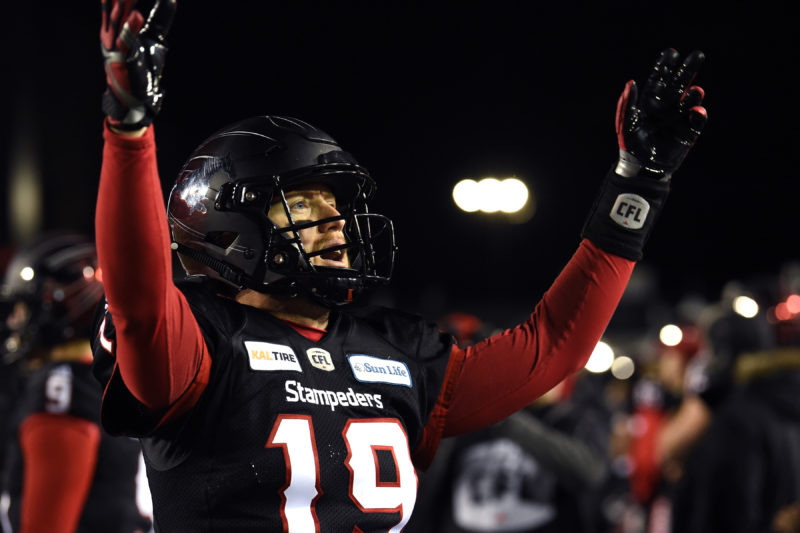 “But to do that, you have to lock in every single play and not have selfish plays and take penalties.

“I’m not gonna say that’s the reason we did it, because I came over there and talked to them. I think we have play makers and guys made big plays at the right time.”

Maver added a punt single before Medlock booted another field-goal to round out the scoring.

“I think we got a little tight. I think our guys ultimately were trying a little too hard. But we got it done. It definitely had us on the edge of our seat. It wasn’t that heavy a scoring game but I do think, ultimately, (you had) two well coached, well played teams there and we just happened to make more plays than they did.”

Running back Romar Morris left the game in the second quarter and didn’t return.

While awaiting a punt return, he fell to the turf with no one around him after looking to step awkwardly.

Dickenson said given how it happened, his first worry is that it’s an Achilles injury but he wasn’t sure of the severity yet at the post-game press conference.

“I haven’t talked to the guy,” said Dickenson. “But certainly it looked like that. He’s in a walking boot. Very disappointed for him personally. As a team, injuries are part of it. It sucks but we have to move forward.

“We have a good guy waiting in the wings in Terry Williams. We’ll be ready to play Terry and go from there.”